Skip to content
Posted on September 21, 2017 by That's Liquid Football

The early years of the Premier League were a time of transition for Tottenham Hotspur. After the FA Cup win in 1991, manager Terry Venables was moved into the role of chief executive, and former manager Peter Shreeves had been appointed for a second stint in the White Hart Lane dugout. A year later, he in turn was replaced by the double act of Doug Livermore and Ray Clemence, and in a move a decade ahead of the revolving guest presenters on Have I Got News For You, a season later a new manager was appointed – Spurs legend Ossie Ardiles. 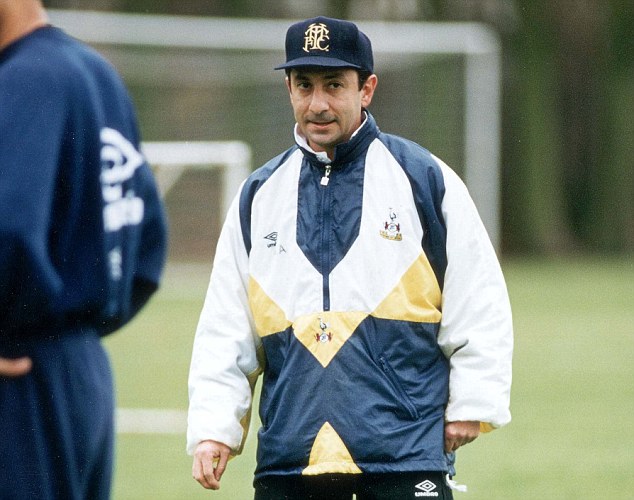 Ardiles had cut his management teeth in the old Second Division with Swindon Town, replacing the traditional kick and run football usually seen at the County Ground with the South American flavor of pass and move attacking play. After winning promotion in 1991 with Swindon, Ossie’s head was turned by Newcastle, but a year later and with the Magpies near the bottom of Division Two, Ardiles was sacked. His reputation at Tottenham, however, was still intact. His first season at the Lane ended in a disappointing 15th placed finish – a negative goal difference suggesting Tottenham’s issues were at both ends of the pitch. So ahead of his second season in charge (a rare treat for a Tottenham manager), Ossie had a plan.

USA ’94 had seen the advent of ‘Rock n’ Roll Football’, the glitz and glamour of the game was ramped up tenfold, and it wasn’t just Diana Ross that caught the eye during the tournament. The first World Cup of the Premier League era, it was a chance for bosses at the top level to cast their eyes over the world’s most elite players, as well as some hidden gems, and with the added TV revenue burning a hole in club’s bank accounts, money was no object. Daniel Amokachi, Phillipe Albert, Klas Ingesson, and John Harkes were just a few of the stars of USA ’94 to make their way to the Premier League after the tournament. Tottenham, too, had identified players to strengthen their team, and almost £9million was splashed out on Romanian pair Gheorge Popescu and Ilie Dumistrescu and, sensationally, German Jurgen Klinsmann.

After two seasons playing under Arsene Wenger at Monaco, Klinsmann was looking for a new challenge, and following a rendezvous on Alan Sugar’s superyacht in Monte Carlo, he quickly realised he’d found it. This bold acquisition marked Spurs out as a team to watch ahead of the 94/95 season, although the question on many supporters lips was how on Earth Ardiles could keep all the attacking talent at his disposal happy? Klinsmann, an out and out striker, and Dumitrescu, a tricky inside forward, had joined a squad that included the talismanic deep-lying forward Sheringham, speedy winger Darren Anderton and 20-year-old attacking prospect Nick Barmby, all of whom were vying for first team spells, and so it was with keen anticipation Spurs fans tuned into their teams opening day fixture away at Sheffield Wednesday to find out who had made the cut.

To their amazement, Ardiles had named all five in his starting line-up.

Set up in an ultra-attacking 3-2-2-3 formation, a front three of Klinsmann flanked by Sheringham and Dumitrescu was supported by Anderton and Barmby, with David Kerslake and Justin Edinburgh providing further width at full-back. Wednesday, boasting their own Romanian import in Dan Petrescu, went with a 4-4-2. It looked like tactical suicide from Ardiles, with a midfield including Chris Bart-Williams, Ian Taylor and John Sheridan certain to overrun the inexperienced Barmby and Anderton and leave the Spurs backline exposed. By half-time, Tottenham were 2-0 up, with Sheringham and Anderton on the scoresheet. Wave after wave of attack had pinned Sheffield Wednesday back, and the two goal margin was the least the visitors deserved. By the 66th minute the scores were level, Spurs’ familiar defensive frailities allowing first Petrescu then a Calderwood own goal to restore parity. Five minutes later, however, the lead was regained as Nick Barmby scored his seventh goal in a Tottenham shirt. The win was secured in emphatic style, with Klinsmann heading home for his first goal in English football, topped off with a tongue-in-cheek diving celebration that changed the state of school uniforms forever. There was still time for David Hirst to pull a goal back for Wednesday, but Tottenham had laid down an impressive marker on the first day – if you score three, we’ll score four. The Famous Five was born.

By the end of August a narrow home defeat to champions Manchester United was the only blot on the copybook, as Klinsmann added to his opening day goal with a pair of braces against Everton and Ipswich to leave Tottenham looking healthy in sixth, third top scorers behind Newcastle and Liverpool. Sadly that was as good as it got for Ardiles, and despite recording wins against Wimbledon and West Ham, as well as a six-goal salvo at Watford in the League Cup, poor results led to Ossie’s sacking, leaving Spurs mid-table and out of the cup following a three goal thrashing at Notts County.

QPR manager Gerry Francis was quickly drafted in, and despite losing his opening game at home to Aston Villa in typical Ardiles style – recovering from three goals down only to lose 4-3 thanks to a 90th minute winner from Dean Saunders – Tottenham’s form was stabilised, and an unbeaten run of ten games – including 6 clean sheets, one fewer than Ardiles had managed in his whole tenure – saw Spurs back up to 6th by the middle of January. A further five clean sheets followed in the remainder of the season, though attention had been turned to an ultimately unsuccessful FA Cup campaign, and an 8th placed finish at least represented a modicum of progress from the previous season.

The Famous Five was disbanded at the end of the season – Klinsmann opting out of a contract extension and heading back to Germany with Bayern Munich, Dumitrescu joining Harry Redknapp’s foreign legion at West Ham and Barmby swapping North London for North Yorkshire and jumping on the Bryan Robson bandwagon at Middlesbrough. Spurs reverted to a 4-4-2 the following season, with new signing Chris Armstong partnering Sheringham up front, and Anderton switched back to a more familiar left-wing role. The gung-ho approach was fun but it could never last.

Since his sacking at Spurs, Ossie Ardiles has travelled the world as a coach, pitching up in Mexico at Guadalajara in his next job, and taking in Japan, Croatia, Syria and Israel on his attacking football odyssey, but his managerial achievements never quite reached the heights of his playing days. He can now be seen as a pundit on Irish TV, as well as a regular on the after dinner circuit.

The 1994/95 season went down in history as the year little old Blackburn Rovers pinched the league title from Manchester United, with Alan Shearer and Chris Sutton firing the Lancarshire club to their first top flight trophy in 80 years. It was also the last year the league was played with 22 teams as Crystal Palace, Norwich City, Leicester City and Ipswich Town were relegated and replaced by Middlesbrough and Bolton Wanderers. The reduced league would see a more competitive edge for the following season, but surely it would be a long time before we saw football played with such reckless abandon as the Tottenham Hotspur side under Ossie Ardiles…