Skip to content
Posted on September 26, 2017 by That's Liquid Football

The final knockings of British Summertime are upon us. The leaves have turned from green to brown, the sky from blue to grey. The nights are drawing in and the mornings have become misty. Boiler repair companies up and down the country are gearing themselves up for their busiest time of the year, as the familiar sound of a clunk followed by a silence greets chilly people, and they prepare themselves for the obscene bill they’ll have to pay in order to heat their home. Short-sleeved shirts and summer dresses are replaced by moth-eaten jumpers and moldy raincoats, and as your tan slowly fades away your winter gut quickly protrudes over your long johns. So the circle of life continues.

With that in mind, it was with some astonishment that football fans across the country were greeted with warm sunshine at this weekend’s games. The only cloud to be seen at The London Stadium was the one hovering over Slaven Bilic’s head. A marked man since The Greatest Stadium Migration Ever™ ended in West Ham’s star player throwing a wobbly and jumping on the first EuroStar out of London, and the Hammers embroiled in a relegation scrap. Three defeats at the start of this season saw the Croatian placing an order with Rymans for a pack of ten Q-Connects, only to be given a reprieve after earning four points from the last two games. His latest test came in the form of Tottenham Hotspur, who’ve been having their own nesting issues at Wembley Stadium. Well if your landlord let a load of people come and play American Football in your house while you were away you’d be pretty hacked off, too. 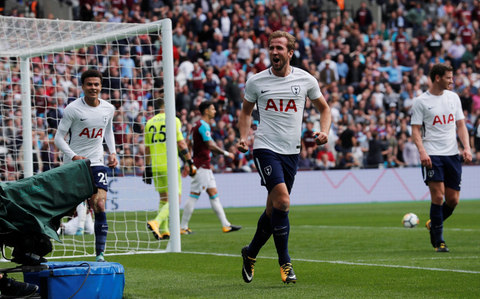 Spurs took the lead ten minutes before half-time, capitalising on a sloppy pass from Andy Carroll, whose ball was intercepted by Christian Eriksen. The Dane then found Dele Alli who’s cross was gleefully converted by Harry Kane. Four minutes later the lead was doubled – Kane feeding Alli this time, and though Joe Hart did well to smother his shot, the rebound fell kindly for Kane to tap home his sixth goal of the season. Considering he took August off, the Spurs talisman is in frightening form, with four goals in three September games. On the hour mark the game looked over as a contest as Kane’s shot cannoned off the post, only for Serge Aurier to tee up Eriksen for a 20 yard drive into the bottom corner. It looked as though the only entertainment Hammers fans would be finding this Saturday lunchtime was competitive chair launching, but before they had a chance to get their multi-tools out Hernandez had reduced arrears with a blistering header from three yards out. Aurier was given his marching orders five minutes later for a daft tackle on Carroll, and the Hammers rallied, but Kouyate’s bullet header was too little too late. Four points from six games leave West Ham in the bottom three, with stormy times ahead for Bilic.

Three of the top four all kicked off at 3pm, as champions Chelsea headed to the erstwhile Britannia to take on Stoke City. Conte’s team haven’t always had it their own way in the Potteries, but when Alvaro Morata gave them the lead in the second minute it looked as though it might be a more relaxing day for the Italian than expected. Pedro doubled the lead on the half hour, as the usually reliable Darren Fletcher chested the ball into his path and the Spaniard spanked a 20 yarder past Jack Butland. Stoke, who had looked impressive at home against Manchester United and Arsenal, may feel they should have dragged themselves back into the game with self-proclaimed striker Mame Biram Diouf missing three excellent chances, and they could also have a claim that Chelsea should have been reduced to ten men as Marcos Alonso twice scythed down opponents, both times appearing to claim that he was the victim of a foul. A brazen tactic that somehow endeared him to the referee, but less so to the usually level-headed home fans. Those missed chances from Diouf came back to haunt Stoke as two goals in five minutes from Morata completed the Spaniard’s first hat-trick in English football and consigned Stoke to a familiar 4-0 home defeat.

Champions-elect Manchester City also kicked off at 3pm, welcoming Crystal Palace Nil to the Etihad. Quite how Roy Hodgson’s prepared for this fixture is anyone’s guess, but its a safe assumption that he didn’t go on a boat-ride up the Thames. Pep Guardiola, dressed like the older member of a late 90s boyband, rested Gabriel Jesus and brought Raheem Sterling and Leroy Sane into the starting lineup, and it was the be-afroed German that broke the deadlock, juggling David Silva’s through ball past Scott Dann and tucking it into Wayne Hennessey’s far post. Fifteen minutes into the second half, Palace were three down as Sterling twice tapped in from a few yards out, and the man who operates the vidi-printer cracked his knuckles in preparation of typing out the final score in capital letters. It could have been different had Ruben Loftus-Cheek taken two gilt-edged chances early in the first half, but by the time Sergio Aguero cushioned a header into the corner for City’s fourth, Palace were well out of the game. Part-time mascot Fabian Delph was brought on for the final twenty minutes, and rewarded his manager’s faith by curling a lovely shot into the top corner to make it five. The midfielder’s goal had Guardiola on his feet – though that could have just been a key change. Crystal Palace head to the other side of Manchester next week in their seemingly never-ending search for a goal, and its only the ineptitude of others preventing them from being cut adrift at the bottom of the table.

Elsewhere Romelu Lukaku took his indescript gentleman’s agreement to Southampton and scored the only goal of the game to continue Manchester United’s strong start to the season. Wayne Rooney turned up in his Halloween costume ‘Unfulfilled Potential Crying Blood’ five weeks too early but still saw The Ghost of Transfer Windows Past Oumar Niasse score twice to secure three points for Everton against Bournemouth. Watford got back on track following last week’s shellacking to Man City as they secured a 2-1 win at Swansea, while Burnley and Huddersfield showed the watching world why its not always great fun to have parochial northern teams in the Premier League as they spent 90 minutes hoofing the ball from one end of the pitch to the other.

Saturday tea-time saw a re-run of Alex Oxlade-Chamberlain’s nightmare, as Liverpool visited Leicester for the second time in a week. Chamberlain was replaced in the line-up by future Barcelona flop Philippe Coutinho, and it was the Brazilian that laid the ball on for Mo Salah to break the deadlock with a header after fifteen minutes. Coutinho himself doubled the lead with a freekick eight minutes later, and it looked as though Liverpool were cruising. That lead was chopped in half just before the break as Shinji Okazaki poked home Harry Maguire’s header. Game on. Leicester pushed for an equaliser from the start of the second half, but when Maguire strode into the Liverpool half with the grace of a drunk uncle imitating Kate Bush at a family wedding and lost the ball to Jordan Henderson, Liverpool’s famed counter attack sprung into action, with Henderson firing past Schmeichel to restore the two-goal cushion. A minute later, Leicester were back in it as Simon Mignolet parried a shot straight onto Jamie Vardy’s head, and three minutes later the Belgian fluffed a clearance and brought the England striker down, giving the chance for Leicester to equalise. Vardy’s penalty, however, was straight at the goalkeeper, and Liverpool hung on to record their third victory of the season.

Sunday’s only game saw The People’s winners of the Championship last season take on the actual winners of the Championship last season, as Brighton and Hove Albion squared off against high-flying Newcastle United. Those that had opted to take advantage of the Sunday sunshine and go out for a leisurely afternoon stroll will have been left feeling smug as two teams seemingly afraid to take the game by the scruff of the neck exchanged half-chances in a stale first half. Joselu again missed a good chance for Newcastle after his profligacy last weekend against Stoke, while Brighton saw a shot blocked on the line before the two teams headed in goalless at the break.

After some soft and gentle words during half time, Chris Hughton saw his side take the lead in the 51st minute, Israeli forward Tomer Hemed hooking the ball past Rob Elliott after Anthony Knockaert’s freekick had been nodded into his path. Solly March was unlucky not to double the hosts lead, producing a fine stop from Elliott, and there was little to shout about at the other end as Benitez’s team struggled to find their rhythm. The introduction of Jonjo Shelvey and Dwight Gayle seemed to breathe life into Newcastle’s attack, and it was Shelvey who almost restored parity, seeing his shot direct from a corner scrambled away by Mathew Ryan. Christian Atsu should have done better with a chance five yards out, but Brighton held on for a win that will taste very sweet indeed. Newcastle back down to Earth with a bump after a week of riding high in 4th place.

The Monday Night Football train rolled into North London as an Arsenal side that can’t decide whether its a competent football team or a complete circus took on a West Bromwich Albion side that are the dictionary definition of competent. The occasion marked Gareth Barry’s 633rd Premier League appearance, breaking Ryan Giggs’ record and angering Proper Football Fans up and down the country as they cry into their 1991/92 Rothmans Annual. It was West Brom that made the early running, and were denied a stonewall penalty by Bobby Madley after Shkrodan Mustafi challenged Jay Rodriguez and showed a complete lack of ability to identify a football. The Baggies forward may have had more joy if he hadn’t quickly picked himself up and fired a shot onto Petr Cech’s post. That missed opportunity gave Arsenal a much needed kick up the jacksie, and they were soon ahead after Alexandre Lacazette nodded into an empty net after Alexis Sanchez’s free-kick had bounced back off the bar. West Brom could have found themselves level, however luck deserted them again as Rodriguez’s header was cleared off the line by Nacho Monreal.

The second half saw Arsenal awarded a much softer penalty than the one denied for West Brom, as Allan Nyom used his winter padding to usher Aaron Ramsey off the ball, referee Madley deciding that just wasn’t on, allowing Lacazette to double his tally from the spot. The Frenchman could’ve had a third when teed up by Sanchez, but his rushed finish flew into the Islington night sky. A spirited performance from Pulis’ side, but ultimately a lack of killer instinct (and correct refereeing decisions) denied them a result. Arsenal’s crisis continues as they find themselves below Watford.

So its very much as you were in the Premier League. The two Manchester clubs lay waste to all before them, while Chelsea tag along like an annoying younger brother with psychopathic tendencies. Newcastle’s brief flirtation with the top four has ended, being displaced by Tottenham, while Watford, Burnley and Huddersfield’s decent starts to the season see them making up the rest of the top half. Palace, Bournemouth and West Ham occupy the bottom three, just below a Leicester side who’s slow start seems to have gone under the radar. As summer turns to autumn those teams down the bottom will be looking to pick up points as quickly as possible, otherwise those long nights could start to feel even longer.