England’s victory at the U17 World Cup in India last weekend was met with mixed reactions. For many it was a chance to trumpet the work of the FA youth programme ‘DNA’, and proclaim that the future looks bright for the national team, while others were quick to pour scorn on the achievement, having seen promising young players fail to deliver on a bigger stage. So how much can we take from the players that shine at youth tournaments, and does winning an U17 World Cup ever translate into success for the seniors?

“They need to get senior opportunities now or it’s all been a waste of time”. Even before the victorious England team had a chance to finish drinking their celebratory glasses of orange juice, Joey Barton, capped once for England, was pouring boiling hot scorn all over their achievement. Having already seen the U20s side win the World Cup in the summer, as well as the Toulon tournament, and the U19s win the Euros, England have suddenly become the most successful side in youth football history. No country has ever won more than two major tournaments in a summer, and a 5-2 victory over Spain in Salt Lake City for Steve Cooper’s side saw Germany and Spain usurped in the youth football ranks.

Despite the success, there is a feeling that many of this crop of youngsters will miss out on the nurture and experience that regular first team football provides. Phil Foden, who won the Golden Ball for best player at the tournament, is contracted to Manchester City and, as an attacking midfielder, has a host of multi-million pound senior professionals obstructing his way to the first team. Foden might be wise to follow the example of team-mate Jadon Sancho. The youngster was recalled by his club Borussia Dortmund after the group stages, having already set the tournament alight in his first three games. Dortmund boss Peter Bosz had clearly seen enough from Sancho to thrust him into the first team following an £8m transfer from Manchester City this summer. While the London-born Sancho was only given six minutes against Eintracht Frankfurt, it’s clear his manager rates him and is willing to give him game time, something that remains to be seen with Guardiola and Foden. Rhian Brewster, another of England’s stand out players, is currently contracted to Liverpool, but is a long way back in a pecking order that includes Sadio Mane, Roberto Firmino, Daniel Sturridge and Dominic Solanke. Brewster’s consecutive hat-tricks in the Quarter and Semi-Finals earned him the Golden Boot as the tournament’s top scorer, and in Jurgen Klopp he has a club manager willing to take a chance on youth, but it’s more likely that a loan move to a lower league will follow shortly in order to give Brewster the regular game time he needs. Steven Sessegnon, impressive at left-back during the tournament, has the unique problem of vying for a first team place with his twin brother. Ryan Sessegnon has already earned admiring glances with his performances in the Championship with Fulham, particularly in a Man of the Match performance against Newcastle at the tail end of last season. Ryan was left out of the squad due to first team commitments, but Steven acquitted himself well enough to be knocking on Slavisa Jokanovic’s door this season. 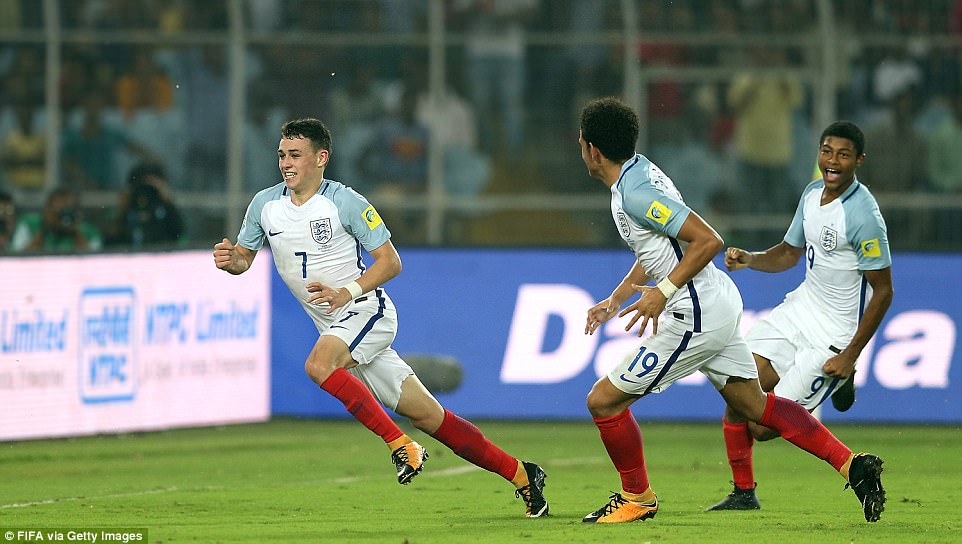 But how likely is it that these breakout stars will have a real impact on the game in the future? Since the competition was established in 1991 the majority of players to have performed at the U17 World Cup have gone on to have low-key careers, though each tournament has produced household names. The first tournament, staged in Italy, saw the hosts field one Alessandro Del Piero. Two years later the Italians included Gianluigi Buffon and Francesco Totti in their squad, and within 15 years all three had played key roles in winning the World Cup for Italy. Ghana were the winners of the inaugural tournament, setting a trend for African success at U17 level. Their winning side included Sammy Kuffour and Nii Lampety who would both go on to represent the senior side. Kuffour, along with fellow U17 winner Stephen Appiah, were both named in the squad for Ghana’s World Cup debut in 2006. Fellow African side Nigeria hold the all-time record of U17 World Cup wins with four, though there is more than a degree of controversy when it comes to the Nigerian national team and age restrictions. In their first triumph in 1993, Nwankwo Kanu and Celestine Babayaro were both members of the squad. At 17 years old, Kanu just about qualified to participate, though rumours of his actual age being between seven and ten years older than his given age could explain his country’s dominance in that edition. Babayaro was listed as a 14 year old in 1993, and while he may not have shared Kanu’s grown-up looks, the left-back did suspiciously retire aged 30 – though playing regular football for Anderlecht at the age of 15 would have put great strain on his growing body. 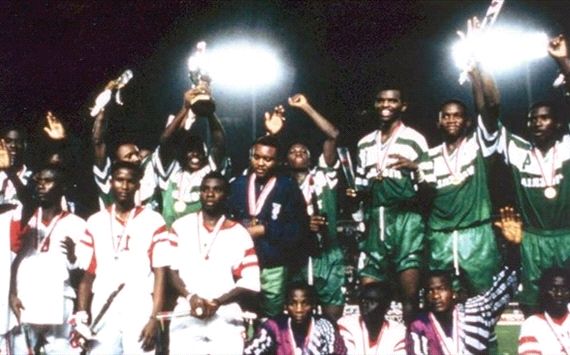 Brazil are, unsurprisingly, the next best side at U17 level with three World Cups. Their first, in 1997, was spearheaded by Ronaldinho, one of the first real superstars to emerge at the tournament. The horse-faced party-boy soon established himself in the Gremio first team, before making his name at Paris St Germain. The 1997 tournament also marked the first year of Spain’s production line of talent. Between 1997 and 2003 Iker Casillas, Xavi, Pepe Reina, Andres Iniesta, Fernando Torres, Cesc Fabregas and David Silva were all members of the U17 squad to represent Spain at the tournament. All seven would play their part in Spain’s four years of dominance between 2008 and 2012.  The 2001 edition also featured Javier Mascherano and Carlos Tevez in the Argentina squad, before their bizarre move to West Ham made them household names in England. France, the winners that year, provide a cursory tale in nurturing youth. Of the six players in the winning side in 2001 that went on to earn international caps at senior level, only one went on to represent Les Bleus – Florent Sinama-Pongolle, once. Algeria, Ivory Coast, Senegal and Tunisia were the grateful recipients of players that were not deemed good enough to grace the French national team. Mexico’s win in 2005 produced three key members of the national squad of the last decade. Carlos Vela, Giovani Dos Santos and Hector Moreno have 250 senior caps between them, and led the U17 side to victory over a Brazil team that included Denilson (not that one), Anderson (yes that one), and Marcelo.

As the competition moved into the late 00s and early 10s, there was suddenly an abundance of outstanding talent emerging at these tournaments. Investment across the globe in youth football was beginning to pay dividends, and the future stars from the 2007 to 2013 editions were numerous. Nigeria’s victorious squad in 2007 may have failed to make an impression in senior football, but they were able to defeat David De Gea’s Spain side, though they fell at the final hurdle against a Switzerland team boasting Haris Seferovic and Granit Xhaka two years later. Danny Welbeck, Danny Rose and Victor Moses became the first promising England players to appear at the tournament since Julian Joachim, however Moses opted to represent Nigeria at senior level. At the same tournament, future Real Madrid teammates Toni Kroos and James Rodriguez represented Germany and Colombia respectively, while Eden Hazard turned out for Belgium. The 2009 edition, in hindsight, produced the highest number of future stars in the competition’s history, many of whom will be present at the World Cup in Russia. Germany’s squad included Marc Ter-Stegen, Shkrodan Mustafi, Kevin Volland and Mario Gotze – just five years away from scoring the winning goal in a World Cup final. Brazil’s squad featured now #1 goalkeeper Alisson, Phillipe Coutinho, Casemiro, and Neymar, though the latter completely tanked in the tournament. Three of the Netherlands side were in the squad for the 2014 World Cup in Joel Veltman, Stefan De Vrij and Bruno Martins Indi, while Spain’s production line continued with the inclusion of Koke, Isco and Alvaro Morata.

Given that many players featuring in the past four tournaments are at most in their early-twenties, it may be too soon to pass judgement. But the appearences in 2011 of Memphis Depay, Aymeric Laporte, Raheem Sterling and Marquinhos show that there are always a handful of excellent future footballers appearing at the U17 World Cup. Isaac Success and Kelechi Iheanacho starred for winners Nigeria in 2013, and Christian Pulisic’s appearance for the USA in 2015 has led to him becoming a key player at Borussia Dortmund. 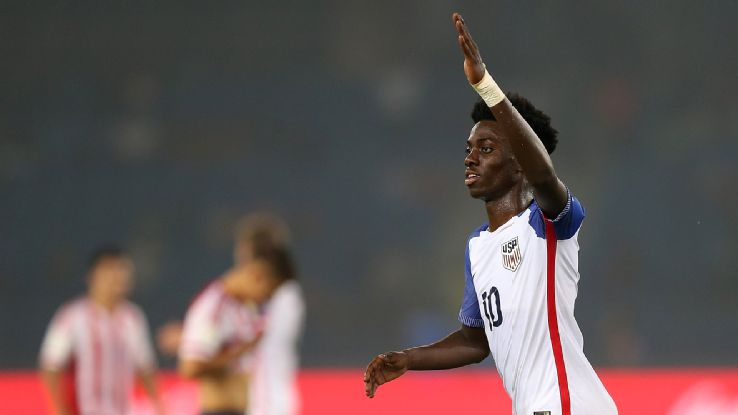 And what of the class of 2017? Aside from England, there were plenty of fresh faces to get excited about, particularly the USA who are desperate for new blood after missing out on Russia. Timothy Weah and Josh Sargent are two prolific strikers at U17 level, and Sargent has recently signed for Werder Bremen. Mali’s Lassana N’Daiye is on the radar of Manchester United and Chelsea after scoring six at the tournament, though whether a move to either is good for his career remains to be seen. Five-goal Jann-Fiete Arp has already opened his account for Hamburg, while Abel Ruiz and Sergio Gomez are two of the most promising prospects emerging at Barcelona.

As far as victory at underage tournaments promoting success for the seniors, the jury is out. Since 1991, Nigeria have won two African Cup of Nations and appeared in two World Cup quarter-finals. After their maiden U17 win in 1997, Brazil have won one World Cup and three Copa Americas. France and Switzerland, the only other European countries to have won the competition, have not triumphed at a major tournament since their victories. To briefly touch on the U20 World Cup, Argentina are the most successful side in the tournament’s history, winning six tournaments between 1979 and 2007. Their last World Cup win was in 1986, and they’ve only ever won the Copa America twice – back-to-back titles in 1991 and 1993. The suggestion that England are producing a team to challenge throughout the 2020s is certainly premature, but if some of these players can hit the heights of their predecessors then supporting the national team may become somewhat more enjoyable that it has been in the last decade.