Last weekend’s FA Cup First Round action saw teams from Leagues One and Two enter the competition, and with them the chance for non-league teams to spring an upset. As it transpired, there were few surprises. Hyde United received a 4-0 hiding from MK Dons, Shaw Lane were dispatched 3-1 by Mansfield Town, Ebbsfleet United were hit for six by Doncaster Rovers, while Truro City, Dartford and Maidenhead United were all soundly beaten by their Football League opposition. The only two sniffs of a shock were at Meadow Park, where National League side Boreham Wood snatched a late winner to knock out League One Blackpool, and Whaddon Road, where League Two Cheltenham Town were beaten by Maidstone United. The chance for a non-league shock isn’t over yet however, with seven sides below the fourth tier already through to the second round, and a further four places up for grabs in this week’s First Round Replays. The tastiest looking tie of the second round sees 2013 FA Cup Winners Wigan Athletic travel to National League new boys AFC Fylde in something of a local derby. For Fylde, it represents the latest peak in their stratospheric rise.

“I’m absolutely delighted with the draw… it will be the biggest game that has ever been staged at Mill Farm and probably the biggest game in the club’s history. It’s a great occasion and one that we are relishing.” AFC Fylde manager Dave Challinor is no stranger to the romance of the cup. During his spell at Tranmere Rovers from 1994-2002, Challinor helped the Birkenhead side to consecutive FA Cup quarter-finals in 2000 and 2001, as well as reaching the 2000 League Cup final. Victories over West Ham, Sunderland, Everton and Southampton in those cup runs cemented that Rovers side’s status as club legends, and Challinor rose to fame as their secret weapon. Long before Stoke City and Rory Delap were introducing the long throw as a means of causing havoc in the opposition box to the Premier League, the Chester born full-back was using his catapult arms to unsettle top division defences. Brave defeats in two ding-dong quarter finals against Newcastle United and Liverpool would end Tranmere’s hopes of cup glory, but nearly two decades later, and back behind the touchline, Challinor is hoping to add another FA Cup scalp to his CV.

AFC Fylde’s story began with the takeover by local businessman David Haythornthwaite in 2007. The man behind The Tangerine Group, a multi-national veterinary and agriculture manufacturer, had previously attempted to purchase a rising Blackpool, but eventually settled on Kirkham & Wesham, a club created from a merger in 1988 and competing in the North West Counties League Division Two, the tenth step in the non-league pyramid, having won promotion from the West Lancashire League the previous season. Haythornwaite’s mission statement was bold – the club would be in the Conference by 2017, and in the Football League by 2022. In his first year as owner Kirkham & Wesham won the FA Vase at the first attempt, and won promotion to the Northern Counties League Premier Division North. A change of name followed, as the club became AFC Fylde, and spent the next two seasons consolidating their place at step nine. A play-off final defeat to Chorley at the end of the 2010/11 season coupled with a poor start to the following campaign saw manager Kelham O’Hanlon sacked. Challinor, fresh from leading Colwyn Bay to promotion to the Conference North in his first season as player-manager, surprisingly dropped two divisions to take up the reigns at Kellamergh Park. Despite taking over with the club sixteen points off the top of the table, Challinor secured Fylde’s promotion to the Northern Premier League, winning the NPL Manager of the Year. Play-off heartbreak would come back around the following season, losing in the semi-finals to Hendesford Town, but in 2013 – as Wigan Athletic were preparing to oust Manchester City at Wembley – AFC Fylde secured their promotion to the Conference North with a penalty shootout victory over Ashton United. In the next three seasons Fylde would twice lose out in the play-offs, but, true to the owner’s word, they secured promotion to the top-tier of non-league in 2017, winning the National League North at a canter, scoring an incredible 109 goals along the way, including a 9-2 victory against former League Two side Boston United. The 2016/17 season also saw Fylde move into their new 6,000 capacity stadium Mill Farm, with Haythornwaite unafraid to put his money where his mouth is and provide the financial clout to realise his vision of Fylde as a Football League club. With promotion to League Two in the next five years the aim, consolidation is the watchword on the Lancashire coast, and the club currently sit in 18th, six points ahead of the relegation zone. Challinor will take some heart from his side holding the joint second highest goals for in the league, but their leaky defence leaves them sitting with a goal difference of just +2. Provided they can avoid a dramatic loss of form, The Coasters will be hoping to comfortably maintain their place in the National League this season, and the FA Cup provides an extra frisson. 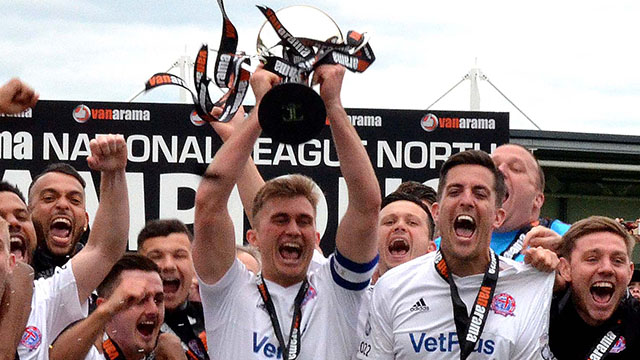 Having already qualified for the first round proper in 2012, 2014 and 2015, last Saturday’s meeting with Kidderminster Harriers of the National League North gave Fylde the perfect opportunity to reach the second round for the first time in their short history. In the 14th minute, The Coasters took the lead through Danny Rowe. The powerful striker has been the club’s top scorer in every season since joining from Macclesfield Town in 2014, and he gleefully doubled the lead in the second half, lashing home from five yards out. Jonny Smith added a sensational solo goal for the third, and former TNS midfielder Sam Finley secured the win in the 64th minute. The Coasters’ notoriously leaky defence did allow Kidderminster to breach their lines twice to set up a slightly twitchy finish, but the hard work had long been done. After facing Football League sides in their last three first round appearances, the luck of the draw was on Fylde’s side this time out, and a well deserved glamour tie now awaits them in the second round.

With a sellout expected at Mill Farm and the game televised live on the BBC, Latics manager Paul Cook will be well aware that the trip to Fylde will be anything but a walkover. Wigan are currently sitting second in League One, having lost only twice this season, and were one of the favourites for promotion to the Championship pre-season, but as any misty-eyed follower of English football will tell you, anything can happen in the cup, and Cook will be keen to avoid the surprise defeat to Canvey Island in 2001, the last time Wigan were knocked out by a non-league side. Challinor will be keen to drill his defence ahead of the tie, and will hope that star man Rowe can find some magic to unlock a miserly defence that has only conceded nine times in the current league campaign.  It’ll be a bitterly cold night on the Lancashire coast on the 1st December, but if Fylde can pull off a shock, the Mill Farm faithful will go home dreaming of one of the big boys in the third round.

Elsewhere, Maidstone United were rewarded with a trip to dreamstompers MK Dons, Slough Town of the Evo-Stik Premier Divison welcome Rochdale to Holloways Park, and Boreham Wood head to 1987 winners Coventry City, hoping to emulate the heroics of Sutton United. With the 44 teams from the Premier League and Championship entering in the next round, every non-league side left in the competition will be desperate to get their name in the hat. For Dave Challinor and AFC Fylde, the journey may be just beginning.