Skip to content
Posted on December 3, 2017 by That's Liquid Football

Solihull-born manager Graham Potter takes his Östersunds side to Berlin this week looking to put the icing on an incredible cake. If the Swedish side can secure a win against Hertha they’ll top their Europa League group, confounding all expectations ahead of this season’s competition. The European adventure is the latest chapter in an incredible rise since Potter was installed as manager in Northern Sweden, and after a successful seven years in charge at the Jämtkraft Arena, the British press are now talking Potter up as a future boss in the Premier League.

“We are showing science fiction. At the beginning of the season no-one would have believed it, but we have done it and we deserve it.” The reaction of the Östersunds manager after a 2-0 victory against Zorya Luhansk spoke volumes. Despite the meteoric rise of ÖFK through the Swedish league pyramid, success at continental level was beyond even Graham Potter’s wildest dreams, and for a city with a population fewer than 50,000 a place in the knockout stages of the Europa League certainly represents success. Potter has transformed the fortunes of the club he was parachuted into in 2010, taking them from the verge of relegation to the Swedish fifth-tier to one of the best 32 teams in Europe in seven years, and cultivating a strong bond between the football club and the community. It’s no wonder he’s now earning admiring glances from back home.

Potter’s story begins in the unlikely surroundings of Boston, Lincolnshire. A town perhaps better known for being the most obese in Europe or for having the highest proportion of Leave voters during the 2016 referendum, it once had a modestly successful football team. Boston United rose through the non-league pyramid and during their brief spell in League Two their team at various points boasted Paul Gascoigne, Graham Potter, and Graeme Jones. Jones, like Potter, had spent most of his career as a lower league journeyman, but during their time at Boston together the two hit it off and, with aspirations of going into coaching after his playing days himself, Jones saw the potential in Graham Potter to be a future football manager. The two took divergent paths. Jones took a place on Roberto Martinez’s coaching staff – following him from Swansea and Wigan to Everton and now Belgium, while Potter went to university – working as a football development manager at Hull University and Leeds Metropolitan, and gaining a Masters in Leadership and Emotional Intelligence. It was this schooling that would feed into Potter’s unique style of management, learned away from training pitches and dressing room bonhomie. Meanwhile, Jones had made an acquaintance during Swansea’s pre-season trip to Sweden – Daniel Kindberg, the chairman of Östersunds FK, a lowly fourth tier side. When Jones recommended Potter as the ideal candidate to fill the vacant managers role ahead of the 2011 season, Kindberg wasn’t entirely convinced but figured things could only get better. 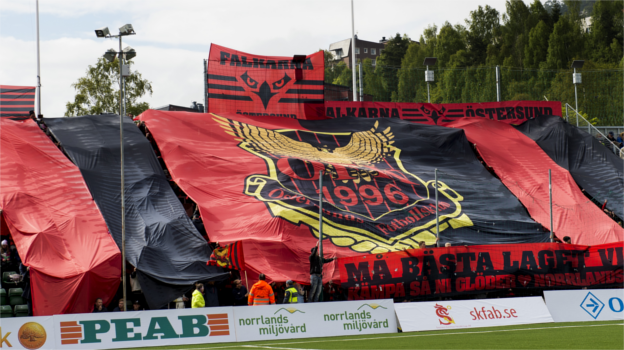 And they did. In the 2011 season Östersunds stormed the Northern section of Division 2, winning the league by nine points and losing only twice in 22 games. The following year they won promotion again, stealing top spot of Division 1 Norra from IK Sirius on the final day. Within 18 months Potter had taken the team from the doldrums of the fourth tier to the unknown of the Superettan. Remarkably, throughout these two promotions, Potter didn’t spend a penny in the transfer market. His recruitment policy relied on spotting gems from the Swedish lower leagues, taking a punt on young African players, and using his contacts in England to persuade promising non-league players to take the leap of faith over to Sweden. One of his first signings, and the key to Östersunds success in those two promotions, was Brian Wake. Stockton born Wake is now Potter’s assistant, but when he was signed he’d just endured a poor season up front for Gateshead in the Conference Premier. In two seasons in Sweden Wake scored 26 goals in 33 games. One of the side’s current star players has a similar story to Wake. Jamie Hopcutt was persuaded to swap North Yorkshire and Tadcaster Albion for North Sweden ahead of  Östersunds Division One campaign. Five years later he scored a crucial goal against Galatasaray in a Europa League qualifier.

The secret to Östersunds success perhaps lies in the modern coaching methods of Potter and Kindberg’s unorthodox means of fostering a connection between the club and its fanbase. While the Englishman is putting his masters in leadership and emotional intelligence to good use, his boss is organising a production of Swan Lake, with the players and staff taking a starring role. Aside from fitness work and training drills, Potter puts great importance on team bonding, and incorporates team-building and trust exercises in his players’ daily routine. Meanwhile, Kindberg encourages the players to create their own artwork in order to hold an exhibition for supporters. The proud people of the Jämtland, an oft-neglected corner of Sweden, now have a cornerstone to depend on in the shape of Östersunds FK.

On the pitch, the runaway success for the black and reds slowed up a little as they adjusted to life in the Superetten. After staving off relegation in their first season to finish 10th, they followed up with a fifth-place finish in 2014. Clearly Potter’s side weren’t overawed by the step up in quality, and in keeping with their season-on-season improvement they were promoted to the Allsvenskan in 2015. While some may have expected them to struggle in the top division, Östersunds didn’t drop into the relegation zone once throughout their maiden season, and in the Swedish Cup an even more incredible story was unfolding. In a competition historically dominated by the big three Swedish teams – Malmö FF, AIK and IFK Göteborg – Östersunds breezed through the group stage, the only side with a 100% record, and brushed aside Trelleborgs in the quarters and cup holders BK Hacken in the semis before a resounding 4-1 victory over IFK Norrkoping in the final. A first piece of silverware for the team founded in 1996, and a glorious moment in the burgeoning career of Graham Potter.

Potter’s ongoing transfer model has also been a key part in the success of Östersunds, with many of the current squad having travelled up the leagues together, while newcomers have been plucked from the football scraphead at little to no cost. Indeed, the £56,000 shelled out for Swedish born Iran international Saman Ghoddos remains the only cash transfer sanctioned by Potter during his tenure, and he was signed from the third division. The club captain Brwa Nouri is an Iraq international, but was raised in Sweden after his parents fled the war-torn Middle East. Potter took a chance on Nouri after many Swedish clubs had deemed him too much of a disciplinary risk, but the midfielder is now thriving at the Jämtkraft. Hopcutt has been joined by countryman Curtis Edwards, a full back who started his career with Middlesbrough before being released for a lack of professionalism, and others including Chelsea’s Jamal Blackman have experienced Östersunds on short-term loans.

Heading into European competition for the first time, and in the midst of their 2017 Allsvensken season, few at Östersunds could have predicted the success that lay in wait. A tough draw against Galatasary in the second qualifying round was expected to be the end of the road, but goals from Ghoddos and Hopcutt gave ÖFK a two-goal cushion heading to Istanbul.  A penalty on the hour from Nouri gave the Swedes the lead in Turkey and, despite an Ahmet Calik equaliser, Potter’s men held on for a historic victory. Luxembourg’s Fola Esch were swatted aside in the next round, and two late goals from Ghoddos at home to PAOK saw Östersunds qualify for the group stage on away goals. When the groups were drawn, it looked to be too tall an order for the Swedes to progress from a group containing Bilbao, Hertha BSC and Zorya Luhansk, but victory in Ukraine on matchday one set the tone for the campaign. Another Nouri penalty edged out Hertha in Sweden, and the minnows were minutes away from pulling off an incredible victory over Athletic, only for Inaki Williams to score a late equaliser for the Basque side. A 2-0 win at home to Zorya confirmed Östersunds progression, and if they can do the double over a desperately disappointing Hertha side on Thursday, they might find themselves with a decent draw in the knockouts.

After another improvement in league position this year, finishing fifth in the Allsvensken, the rise of Östersunds doesn’t look to be ending anytime soon. Kindberg hopes to see his side win the Swedish league in the near future, and compete in the Champions League. They don’t look too far off achieving what, seven years ago, would have been an impossible dream. Their success though, will surely hinge on Potter’s ambitions. Having proven himself an outstanding coach in Sweden will he, like Roy Hodgson before him, be tempted to return to home soil and tackle the English game? Whether his methods would be welcomed in the Premier League is another question entirely, but perhaps an ambitious lower league chairman might fancy going on the same kind of ride the most northerly club in Sweden have. Whether Potter can continue his success remains to be seen, but in the meantime Östersunds know how lucky they are to have him, and until the next round of the Europa League at least Graham Potter’s world of wizadry continues.