Skip to content
Posted on December 21, 2017 by That's Liquid Football

Each month we’re sending our obnoxious Eurosceptic correspondent to a scout a different league on the continent, and asking him to file a report without using the phrases immigration, taking back control, loony left, or political correctness. Fat chance. This month we sent him to The Netherlands, which is a shame for them.

“ When I got the call to tell me I’d be taking a trip to the Netherlands I thought I might be reliving my salad days, standing on the street corners of Dulwich and offering some much-needed company to the elderly gentlemen of South East London. Turns out I’m off to Holland. I’ve heard its very flat, which suits my old knees, full of dykes, which I’m not entirely opposed to provided they’re not the butch kind, but also there’s bloody windmills everywhere. Absolute eye-sores. What’s wrong with just using all the non-renewable energy before we start buggering about putting up windmills and solar panels? I’ll be long dead before the oil runs out anyway. It’s political correctness gone mad. It also says here that Dutch men are the tallest in the world. Fancy that. I suppose they’re easy to spot across the flat land, which goes to show theories of evolution are nonsense. They’ll also give away their positions by wearing wooden shoes, and I don’t fancy them outrunning those Surinamese that have managed to sneak their way in. And we thought the UK had it bad with immigration. Though I am happy to report that the VVD (Very Very Dastardly) Party are taking back control from the loony left. Marvellous. So let’s get down to some voetbal. 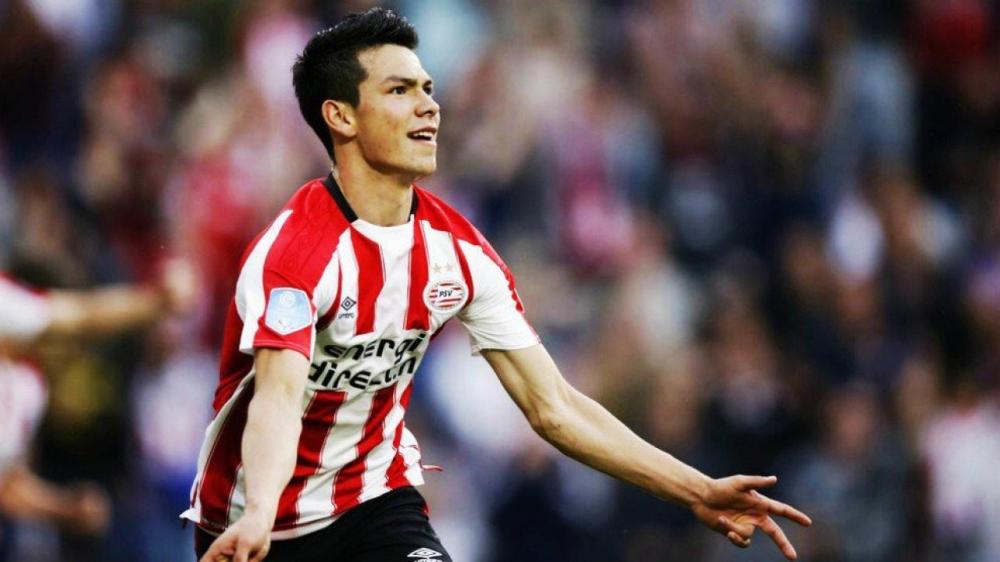 What have televisions, screwdrivers and Prince Charles got in common? Well for one I bloody love all three, but also – they’ve all been made by Philipps! So have PSV Eindhoven, and they’re currently top of the Eredivisie (the scary league!). They’ve won the league twenty-three times, almost as many times as I’ve spat on an asylum seeker. Well, half the amount. But they’ve only won it twice in the last ten years, so perhaps the crown is slipping somewhat from the lightbulbs. Though looking at their record so far this year it looks as though they’ll be picking up the trophy at the end of the season. Oh its not a trophy. Looks like a plate from a silver service. Well, it’s classy if nothing else. Now lets have a look at the team – well even the manager is called Philip! That’s incredible. I wonder if he was made to change his name before they gave him the job. Not a lot of people know that I had to change my name before taking up leadership of the United Kingdom Independence Party. My birth name is actually Constance. Constance Goebbels. But I thought that sounded a little too lah-di-dah to relate to the common working man. Nigel’s a good, honest British name, and Farage gives it an air of Continental levity. And that’s how I ended up as a member of the European Parliament. Anyway, there’s a Mexican chap in the team though presumably he was originally hired as a contractor. Hirving Lozano is the boys name, but he often goes by his nickname ‘Chucky’. No idea why. I used to have a nickname – Big Nige. I came up with it myself but it never caught on. Anyway, the boy Lozano is PSV’s top scorer so far this season, closely followed by Jurgen Locadia. They’ve also got good back up in forward areas, Look! De Jong, and Steven Bergwijn, so they’re sorted for goals. But who’s hoping to knock them off the top?

Hi hooooo! Hi hooooo! That’s right, I’m in Amsterdam’s red light district, and its absolutely delightful. All these ladies dancing in windows, makes me think of the time I returned home from boarding school to find Mummy dancing in the upstairs window at home. Father was out, so I think she was just practicing her moves before their next trip to the discotheque. It was the height of Summer, so obviously she was naked, and…look lets just get back on the subject eh? Amsterdam, full of canals, which in turn are probably full of dead bodies. Dead druggie bodies. Ganja huffing wastrels. Well you wouldn’t find me puffing on a fat boy. Not in my name. While I’m here I may as well take it a bit of culture, too. Had a look at that Van Goff’s paintings, load of shit if you ask me. Of course I took the time to visit Anne Frank’s house and pay my respects. Such great sacrifices made by those German soldiers to ensure Europe was no longer terrorized by fourteen year old girls. I digress. I’m here to have a look at Ajax, which is a name I haven’t heard since reaching fully fledged adulthood. Many’s the morning where Nursey would soak me down in the tub and scrub me clean with Ajax. It was quite abrasive, but made me feel alive. This is a very different kind of Ajax, though they do play in red and white, which coincidentally mirrors what my skin looked like after a thorough clean. Very much a league of nations this lot, which probably explains why they’ve been so inconsistent. You can’t trust Johnny Foreigner to turn up every week. A Cameroonioonian in goal, a Brazilian up front, a Moroccan in slippers on the wing, a Czech, two Colombians, a Greek, a Norwegian, two Danes, a German. It’s a bloody mess. They’re a young lot two, which at least saves on wages. Probably on an apprenticeship or something, £3 a day. Not that I’m knocking apprentices. They propped UKIP up before the sponsorship money from gullible little Englanders came flooding in. So, Ajax – they won’t win the league because they’re too flakey. 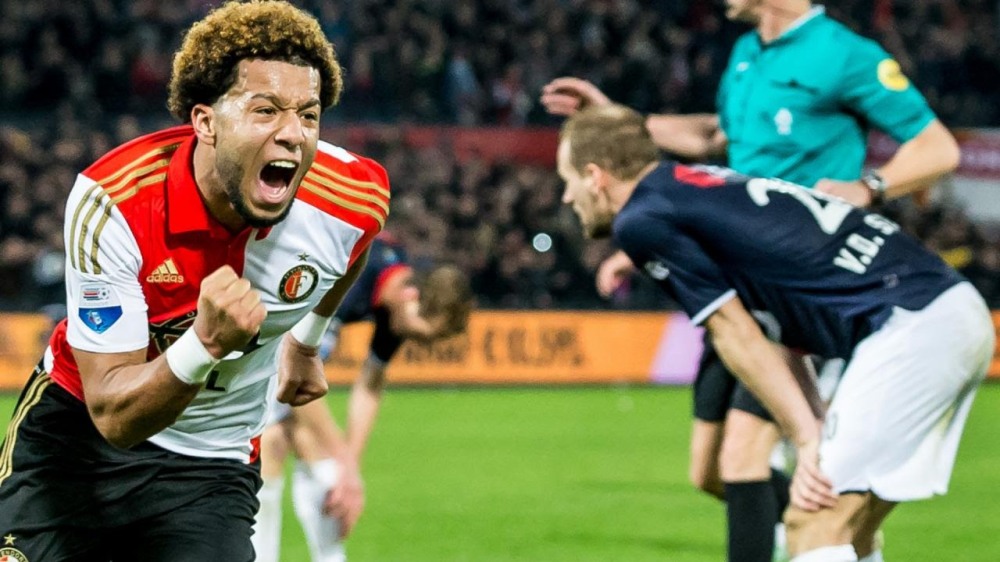 This could be Rotterdam, or anywhere, Liverpool or Rome, but its not full of gypsies or scousers so you can park your car on the road. The team in Rotterdam are called Feyenoord, god knows why, but apparently the white population are the minority in this district of Holland. Well we all saw that coming, lets hope the VVD can clear them out. So Feyenoord are the reigning champions, but they’re not doing very well this time out. On the plus side, they’ve managed to get a load of Dutch boys in the team. Jerry St Juste is a promising young defender signed from Heerenveen in the summer, striker Steven Berghuis has scored seven goals already, and Tonny Vilhena is one of the most exciting prospects in the Dutch league. Unfortunately it doesn’t look like they’ll be defending their title, and they’ve absolutely bombed in the Champions League. Useless. I’ve also noticed that seemingly all the teams in this country play in red and white, and who can blame them. The proud flag of St George. Now where can I get a nice pint of bitter?

My next stop is slap bang in the middle of the Netherlands. The perineum if you will. I’m here to have a look at a team that encompasses the whole of the alphabet. But first a bit of culture. I shan’t be bothering with The Beatles museum because, lets face it, they’re overrated. Give me the New Seekers any day of the week – that’s proper music. I popped my head into the cheese museum but there was no mild cheddar to be had so refused to pay the entry fee. The National Beer museum! That’s more like it. But, alas, no mild bitter here. I like my cheese and beer like the opposite of my political views – palatable. Have you guessed where I am yet? That’s right, its Alkmaar, and I’m looking at the team AZ (refer back to my earlier quip regarding the alphabet – do you get it?). This lot are called the Cheeseheads, but I’ve got a feeling they might lack serious Brie-n power. Ha ha. Their big central defender is called Ron-crete, which I think is a pun on his first name, Ron, and the material concrete. Used to play in Birmingham, the concrete jungle, so maybe he got it there. Or maybe its because he’s built like a brick shithouse. The star striker is Wout Weghorst, which makes him sound like a character from the Harry Potters or something like that. Anyway, he’s bagged six so far this season, and the Cheeseheads are looking good for Europe. Hold on, that’s not a reference to, you know, masculine hygiene is it? Hmm.

My last two stops are on the Dutch border – Germany is next door so its no wonder these boys are preoccupied. If Merkel has her way the whole of mainland Europe will be speaking Arabic by 2020. Though I’m rather surprised to see the team from Enschede struggling down the bottom. What’s so special about this team, Vile? I hear you ask. Well they’re the only professional football team in the world that are allowed to field twenty players. I wonder if its because some of them are dwarves. Anyway, they’ve brazenly named the team FC Twente (Dutch for twenty) to alert their rivals of their superior on-field numbers. Now, you might be aware that FC Twente won the damn thing not so long ago under the tutelage of the great Steve McClaren. McClaren, or Macca as I call him, was years ahead of his time when in charge of England, selflessly removing the country from the European Championships in 2008. Apparently that was the direct inspiration for Brexit. He’s also gracefully losing his hair, leaving an archipelago on top in tribute to the Falklands. Nowadays this lot are, frankly, awful. Take one look at their squad and you can see why – Serbs, Macedonians, I mean these countries didn’t even exist under Thatcher. There’s a couple of Finns too! FINNS! Shouldn’t they be busy overfishing in our waters? Anyway, they’ve already lost ten games and they don’t look like going on a winning run any time soon, twenty players or not.

The team rock bottom of the league are Roda JC Kerkrade. They play in a rather fetching black and yellow number, but that doesn’t stop them from being utterly rank. Unsurprisngly they’ve got a lot of Germans in the squad, given their proximity to Der Mutterland, and their boss used to live in Bradford. You’d think he’d know a thing or two about the negative effects of multiculturalism. Their top scorer this season is Dani Schahin with three, which is pitiful, and they’ve got by far the worst goal difference in the league. Hold on, though. What do we have here? They have a defender called Christian Kum! Ha Ha Ha! Kum! Oh, that is priceless. Like Kum Baya! Marvellous.

So they’re the movers and shakers in the Dutch League given the once over. I’m going to have to make my excuses now – these tall men are extremely intimidating when you get up close to them. Tatty bye!

Vile Barrage will be back next month making it up as he goes along. Much like his Newsnight career.