Skip to content
Posted on March 22, 2018 by That's Liquid Football

The 2017/18 season celebrates 25 years of the Premier League. To mark the occasion we’ll be taking a look at some of the more off-kilter moments from each season. The takeover of Blackburn Rovers by Indian group Venky’s in 2010 was accompanied by statements of intent from the incoming owners. The poultry magnates made promises of broadening the club’s appeal in their native India, and set high targets of turning the club into Champions League regulars. Unfortunately for Rovers fans, these promises turned out to be chicken feed, and by the end of a miserable 2011/12 season they introduced some fowl play of their own.

Blackburn Rovers’ Premier League story had been one of feast and famine. Promoted ahead of the inaugural season under the stewardship of Kenny Dalglish, owner Jack Walker put his money where his mouth was and built a team able to challenge at the top of a league which had very quickly become dominated by Manchester United. Fourth and second placed finishes in the first two seasons were followed by the title winning season in 1994/95. The goals of Alan Shearer and Chris Sutton, and the defensive solidity installed by Dalglish gave the Lancarshire side their first league title for 81 years and finally broke Alex Ferguson’s monopoly on the newly established top flight. In the wake of that title win, Dalglish moved upstairs at Ewood Park, with his assistant Ray Harford stepping in to replace him, but Rovers were unable to maintain the high standards set in their first few seasons in the Premier League. Harford lasted two seasons, finishing 7th and 13th, before Roy Hodgson was brought in from Inter Milan to secure a top six finish, before a poor start to the 98/99 season after considerable investment saw the future England manager shown the door. Brian Kidd, famed for his excellent decision making as a player and an assistant manager at Manchester United, left Old Trafford to join a relegation battle at Ewood Park. Blackburn went down, United completed the treble. You can’t win them all. Two seasons in the second tier, with Graeme Souness replacing Kidd halfway through, saw Blackburn promoted at the second time of asking, and across spells under Souness, Mark Hughes and Sam Allardyce, Blackburn restored their status as Premier League mainstays, finishing as high as sixth in 2003 and 2006. The Jack Walker Trust, set up after the former owner’s passing in 2000, put the club up for sale in 2008 with the hopes of attracting a buyer that could inject serious investment into the club to help lift them back among the challengers for the Premier League title, and in 2010 the sale of the club to the Rao family was completed for £43m. The Indian-based family purchased the club under the Venky’s umbrella, best known for poultry farming. The takeover was music to the ears of manager Sam Allardyce who, though generally more of a steak and kidney kind of man, was never one to sneer at the prospect of free meat. Plus, an injection of cash meant he could look forward to a transfer window where he had more than a few limited edition Heinz Baked Beans ring-pulls to use as currency. Unfortunately for Big Sam, the second game of the Venky’s era resulted in a 7-1 spanking at Manchester United, and two games later the new owners gave the manager his marching orders. The initial front-runners for the job suggested a change in style from the two-types-of-potato-and-an-overdone-chop football that Rovers fans had experienced under Allardyce. Martin Jol, who’d taken Spurs to the brink of the Champions League; Martin O’Neill, who’d won trophies with Leicester City; and Alan Shearer, the man who’d fired Rovers to the Premier League title, were all rumoured to be on the Venky’s shortlist. When it was announced that caretaker Steve Kean would be given the job til the end of the season, there were audible shrugs from the Ewood faithful. Even so, Blackburn were comfortably mid-table, and provided they could maintain their Premier League status there was every chance a big name manager could be attracted to the club in the summer. Kean’s audition for manager was hardly seamless, as Rovers won five of their last twenty games of the season, needing a win at Wolves on the final day of the season to secure safety and finish in 15th, but it had only taken a month for the Scotsman to impress his new bosses, as in the January of 2011 they offered Kean a two year contract after a 3-1 win over a struggling Liverpool, managed by Kenny Dalglish. There’s probably very little King Kenny could do to taint his reputation in Blackburn, but the poor performance from Liverpool that day had untold consequences on his former side.

Still, the silver lining for Blackburn supporters ahead of the 2011/12 season was the promise of investment into a side that was performing way below the sum of its parts. So it was with some reasonable alarm that Rovers fans saw their promising central defender Phil Jones exit Ewood Park during the summer window. Stalwart Brett Emerton was another big loss, while sales of Nikola Kalinic and El Hadji-Diouf further diminished an already limited goal threat. Scott Dann, who’d just been relegated with Birmingham City but emerged from the Blues’ season with more credit than most, was brought in to replace Jones, and a proven goalscorer in Yakubu was recruited from Everton. The rest of Blackburn’s business was patchy to say the least, though it’s easy in hindsight to suggest that a 20 year old striker from Dundee United and a flighty Montenegrin playmaker signed from Portugal weren’t necessarily the steel and experience needed to maintain Blackburn’s Premier League status. Even better/worse was to come for Rovers fans, as Venky’s released an promotional video advertising their produce, and starring Blackburn’s first team tucking into some chicken legs. A fitting tribute to Jack Walker’s legacy, I’m sure you’ll agree. On the pitch, and to the surprise of absolutely no-one, Rovers’ season got off to a stinker, managing just one point from their opening four games. The highlight of the season was around the corner however, as the televised Saturday lunchtime game at home to Arsenal gave Yakubu the perfect platform to announce himself as a Blackburn player. The Nigerian powerhouse scored twice and had a helping hand in the two own-goals scored by Alex Song and Laurent Koscielny as Rovers terrorised Arsene Wenger’s side and ran out 4-3 winners, though the scoreline hardly told the story of the game. If that result was supposed to be the launchpad for Rovers’ season someone forgot to mention it to the players – they wouldn’t win again until December, picking up three points from their next eight games. That abysmal run was enough to earn Steve Kean a pay rise as, presumably, Venkys weren’t au fait with the traditional vote of confidence issued to a manager under fire, instead pledging to fill their ailing man’s bank account to the tune of £1.5m a year.

Rovers actually won their next home game post-payrisegate, with Yakubu scoring four times in a 4-2 win over Swansea, and despite another three game losing run 2011 finished with a draw at Anfield and a win at Old Trafford on Sir Alex Ferguson’s 70th birthday. Those four points lifted Blackburn from the foot of the table, for a few days at least, but a home defeat to Stoke coupled with Bolton’s win at Everton saw them sink back to 20th. Big investment was needed in the January window if Rovers had any hope of staying up, and it was with a weary sense of familiarity that fans discovered Chris Samba had been sold for £11m. Jason Roberts and Ryan Nelsen also left the club, with Marcus Olsson and Bradley Orr the only permanent signings made, despite a healthy looking net-spend across the two transfer windows. Unfortunately, football fans hadn’t yet discovered the phenomenon of net-spend, so the Ewood faithful merely scratched their heads and patiently awaited their fate. Another mini-revival was crushed by a 7-1 defeat at Arsenal, though that defeat sparked a run of three wins from five, lifting Blackburn out of the relegation zone and five points clear from danger with nine to play. Sadly it was another false dawn, and five defeats in a row brought Kean’s side crashing back into the bottom three. A 2-0 victory over Norwich kept them in touch with safety, but by the time Wigan Athletic arrived at Ewood Park for Blackburn’s last home game of the season, relegation looked almost certain. In the face of adversity, Rovers’ supporters were still able to raise a smile when, minutes into the match, a chicken dressed in a club-branded cape was released onto the pitch. The bewildered bird, skittering around the goalmouth, unsure of its surroundings and cowed by the jeering crowd, summed up Blackburn’s performances across the season.  Yakubu and Wigan goalkeeper Ali Al-Habsi were able to catch the chicken and hand it over to stewards so that play could continue. Whether the caped invader’s performance caught the eye of Venky’s casting director was never confirmed, but the protest against the poultry group was the only highlight of a miserable evening, as Blackburn were beaten 1-0 and lost their Premier League status.

Steve Kean resigned the following season after a difficult start to life in the Championship, and a year later took a job managing Duli Pengiran Muda Mahkota Football Club in Brunei. He had a short stint in charge of the Brunei national team, playing four and losing four. Kean left DPMM at the end of the 2018 season, having overseen record home and away defeats in the S.League. The Venky’s era at Blackburn is ongoing, but new lows were reached at the end of last season as Rovers were relegated to League One, becoming the first side to win the Premier League and subsequently participate in the third tier.

Blackburn were joined in relegation by Wolves and Bolton, while at the other end of the table Manchester City capped an incredible season by winning the title with the last kick of the game against QPR. Sergio Aguero’s stoppage time goal gave City their first title since 1968, and snatched the trophy from Manchester United in the process. The so-called ‘Noisy Neighbours’ had ensured Sir Alex’s chickens had come home to roost. Presumably they weren’t wearing a Blackburn Rovers cape, though. That would be weird. 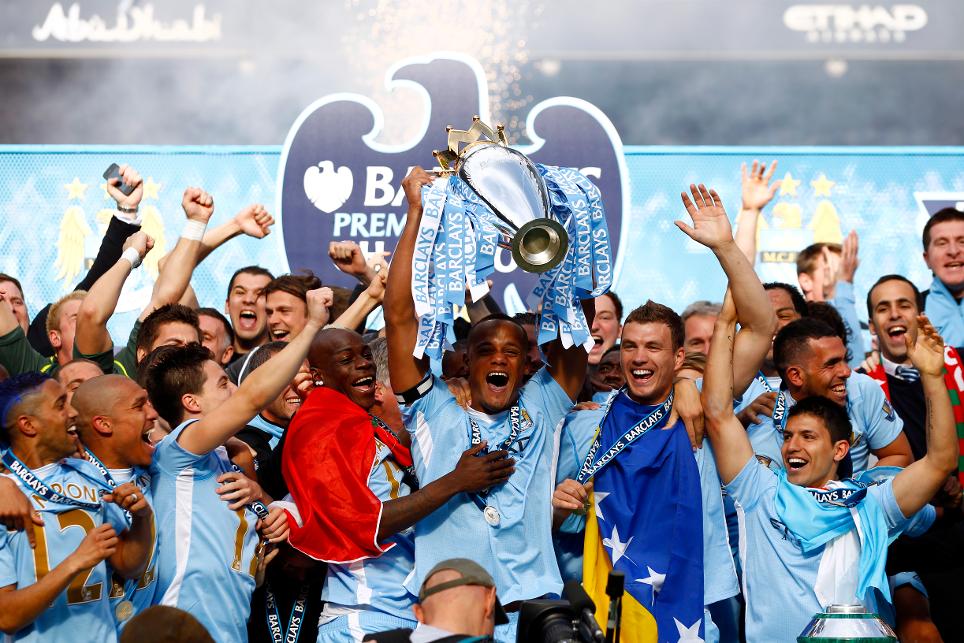