Skip to content
Posted on May 13, 2018 by That's Liquid Football

With Barcelona having avoided defeat against Real Madrid last weekend in what looked to be their last major test of the season, Ernesto Valverde’s side are on the brink of completing an historic unbeaten season. Below La Liga and 200km west from Barcelona however, there’s another momentous achievement brewing, as SD Huesca, a club founded by Barcelona supporters, are on the brink of promotion to the top tier of Spanish football for the first time in their history.

“It would be a fundamental victory to continue to aspire to those two places, if nobody falls, it will be like this until the end, so the goal, now more than ever, is game by game.” SD Huesca manager Rubi can be forgiven for his overly cautious stance. In a seventeen year career in management, the former lower league winger has known little other than disappointment. In 2013, after guiding Girona to the best season in their history, Rubi watched his side beaten in the Segunda Division play-off final by Almeria, and two years later he lost his job at Real Valladolid after being knocked out in the semi-finals by Las Palmas. The following season the Catalonia born coach finally got his taste of the top flight, taking over at Levante, but he oversaw just seven wins at the Estadi Ciutat de València as the Granotas were relegated. Lightning would strike twice again when, having taken over at ailing Sporting Gijon in January 2017, Rubi presided over their relegation from La Liga. Presumably the man avoids ladders like the plague.

Still, the opportunity to take over at SD Huesca promised a fresh start. The Aragonese club suffered their own playoff heartache at the end of last-season, knocked out by eventual winners Getafe in the semi-finals, but promotion to the top tier is hardly an expectation for the club’s small but loyal following. When Rubi was announced as manager, Huesca were about to embark on their third consecutive season in the Segunda Division after winning promotion in 2015, and only the eighth in their history. It makes what Rubi and his players have done this season all the more remarkable, as they find themselves four games from history. 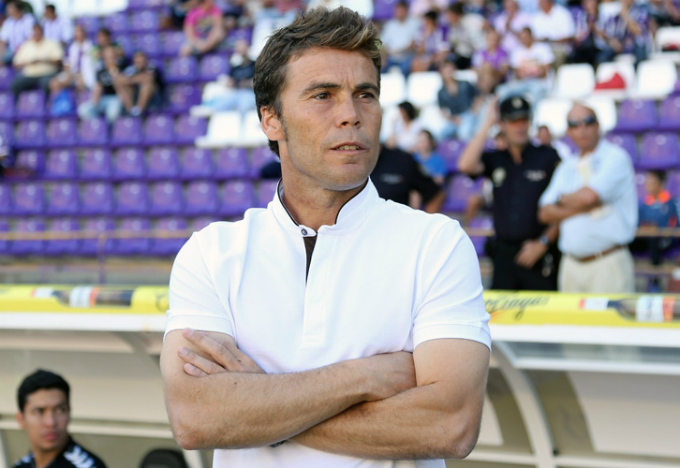 Let’s begin at the beginning. The tiny city in the north-east of Spain is nicknamed The Gate of the Pyrenees, and sits 488m above sea-level. Between 1910 and 1956, Huesca had a football team in three guises – Huesca CF, the originals, overseen by president Santos Solana; CD Huesca, the phoenix club born from the ashes of their predecessors who folded in 1916; and Union Deportiva Huesca, created in 1940 due to a merger with CD Español. The high point for these early incarnations was the promotion to the Segunda Division in 1950, though sadly that would spell the beginning of the end for UD. After three seasons in the second tier, relegation spelled financial ruin, and the club folded in 1956. Four years later, in a meeting at Flor De Huesca, Barcelona supporter Don Patricio Funes led the foundation of the Huesca Sports Society, better known as Sociedad Deportiva Huesca. Beginning their first campaign in the fourth tier of Spanish football, SD Huesca won promotion at the first time of asking, and then got comfortable. An eleven year stay in the Tercera Division was briefly interrupted in the 1973/74 season, but the club bounced back at the first time of asking. A restructuring of the leagues in 1977 saw Huesca join Segunda Division B, confusingly still the third tier, but one that allowed the entrance of La Liga’s ‘B’ teams. Given the understandable shift in quality, it was no surprise to see Huesca struggle, and by 1984 they were back in the Tercera – now the fourth tier. Twenty years of yo-yoing between the two leagues followed, before the club established themselves in the third tier, and eventually earned their first promotion to the Segunda in 2009. Having swam against the tide for five season, then bounced back from another relegation, Huesca finally look to have established themselves as a competent second tier team – but now they’re looking up instead of down.

Huesca’s season started in fairly unheralded fashion, with one defeat, one draw and one win from their opening three games, but a remarkable run of one loss in twenty set them up for a serious and surprising title challenge. Their home form has been nigh on impeccable – just the one defeat, ironically to Rubi’s former club Sporting Gijon – and the 5,500 seater El Alcoraz has witnessed some scintillating victories against some of the league’s bigger names. Consecutive home games saw Real Zaragoza and Tenerife put to the sword back in November, while they’ve squeezed past Osasuna and Granada since the turn of the year – two sides who were relegated from La Liga last season. On the road, too, Rubi’s team have developed a reputation for taking the handbrake off, and the 4-2 demolition job of Tenerife in April was followed almost immediately by the same winning scoreline at Cordoba last weekend. There was a point between February and April that it looked like Huesca’s promotion push would run out of steam. Eight games without a win, including defeats to fellow promotion candidates Vallecano and Zaragoza, saw them drop out of the automatic places, but four wins on the bounce have put them right back into contention heading into the final month of the season. 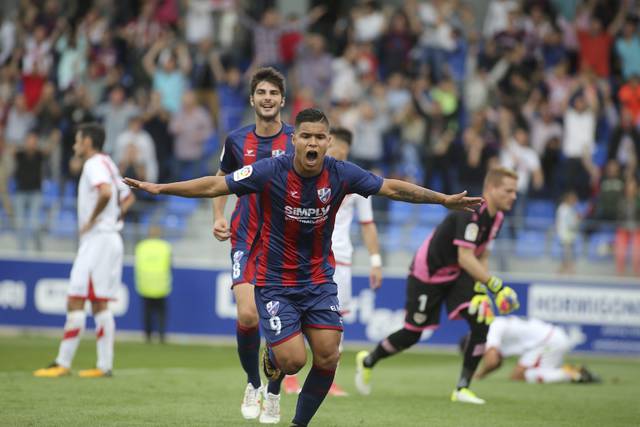 It begs the question – how have a team traditionally found scrapping around between the second and third tiers managed to mount a serious bid for top flight football? Part of it is down to recruitment strategy and club ethos. Young and cheap are the watchwords for Huesca’s scouting team, along with building a team willing to work hard and scrap for results, whilst also having that little bit of flair and magic that can open a game up. Alongside a dedicated scouting team, the club also have links with the Bahia International Agency, who boast the likes of Pedro, Nacho Monreal, Dani Ceballos and Fernando Torres among their clients. One of their most prominent agents is Jose Antonio Martin Otin, a former Huesca player, and through him the club have been able to recruit talent that may otherwise be considered beyond their reach. Former Arsenal youth product Fran Merida spent a season there on the advice of Otin, having seen his career fall by the wayside, and his spell in the North East opened the doors to a move to Osasuna. With such a small budget to work with, Huesca are reliant on loan deals too, and their squad this season has been boosted by the short-term captures of Bilbao keeper Álex Remiro and Argentinian attackers Ezequiel Ávila and Ezequiel Rescaldani, though their star man has been an 18 year old loaned from Watford. Cucho Hernández, a 19 year old Colombian striker, was taken to Herfordshire by Marco Silva, but immediately loaned to the Segunda in order to gain first-team experience. It has, so far, proved extremely fruitful, as Cucho tops the goalscoring charts for Huesca with 16. The quick, powerful, barrel-chested striker has displayed confidence that belies his tender years, and should Rubi complete the job and take Huesca into La Liga, he could do a lot worse than extend the Colombian’s stay. There is unchecked talent across Huesca’s squad, though. Wingers Alexander Gonzalez and David Ferreiro terrify defences with their pace, artful midfielder Gonzalo Melero has weighed in with 15 goals, Jair Amador provides solidity in defence, while support striker Álex Gallar has contributed five goals and seven assists. It’s a team that may well be greater than the sum of their parts, but will also have attracted longing looks from bigger clubs who will surely want to pick the bones should Huesca fail to finish the job.

The serious business starts now for Huesca, with four games of the season left, starting today at home to Alcorcon. They don’t face a side outside the bottom half until the final day of the season, when they visit playoff hopefuls Real Oviedo, and by then the job may well be done. With a three point lead on Gijon, and the Rojiblancos still to travel to Tenerife and Granada, Huesca have their fate in their own hands. But like Rubi says: game by game.