On the 29th March 2019, the United Kingdom is (currently) scheduled to exit the European Union. To celebrate forty-six years of peacetime and prosperity in Europe, this season we’ll be profiling the footballing history of each remaining member of the EU, looking at some of their most iconic matches and the players that have left a lasting impression on the game. This week we’re profiling a player with balls of steel and a penalty taking technique named after him, and the team that shocked the continent at Euro ’96. It’s the Czech Republic. 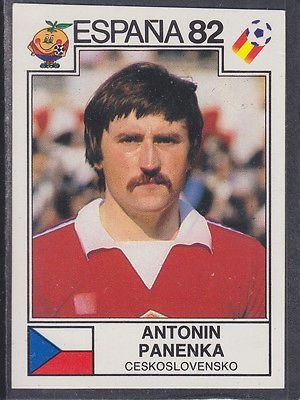 If someone asked you to draw a stereotypical Czechoslovakian footballer from the 1970s, you’d end up drawing Antonin Panenka, regardless of whether you’d even heard of him. With his bowlcut hair, big sideburns, lustrous moustache and a stare that could freeze time, Panenka was your classic communist-era sportsman. That hardened exterior was misleading though, as his creative and playful nature would eventually prove. Born in Prague three years after the end of the second world war, Panenka spent most of his career as the archetypal one-club man, signing for Bohemians at the age of ten and making his full debut nine years later. Aged 33, after fourteen years of majestically spraying the ball about and banging in free-kicks for his hometown club, Panenka enjoyed an indian summer with Rapid Vienna in Austria, winning two Bundesliga titles and three Austrian cups, before gradually making his way down the league ladder in his adopted country, eventually hanging up his boots at the age of 45.

Well, that’s half the story, because Antonin Panenka’s legacy centres largely around just one night of his career – 20th June 1976. By the time the European Championships rolled around, Panenka had already established himself as a regular in the Czech national team, playing the advanced role in a three man midfield that featured fellow Kangaroo Karol Dobiaš and Kosice’s Jozef Móder. Since finishing runners up in the 1962 World Cup, Czechoslovakia had suffered a lack of distinction on the international stage, appearing at just one subsequent tournament, Mexico ’70, where they lost all three games. They arrived in Yugoslavia in ’76 off the back of an excellent qualifying campaign, including a Panenka hat-trick in a 5-0 rout of Portugal, before setting up a meeting with World Cup holders West Germany in the final by beating World Cup runners-up Netherlands 3-1.

The Czechs – all high tempo attacks and tricksy wingplay – raced into a two-goal lead courtesy of Ján Švehlík and Dobiaš, and despite Dieter Müller pulling a goal back, they looked to have their hands on the trophy. Then Eintracht Frankfurt winger Bernd Hölzenbein headed in an 89th minute equaliser, and the game headed for extra-time. No further goals followed, and for the first time an international tournament would be decided with a penalty competition. After successful conversions from Messrs Masny, Bonhof, Nehouda, Flohe, Ondrus, Bongartz, and Jurkemik, Uli Hoeness stepped up and ballooned his kick over the bar, handing match point to the Czechs. Up stepped Panenka, penalty aficionado and the picture of serenity. From an almighty run up, his 5ft 10 frame raced towards the ball, looking for all the world he was about to blast it at goal, before checking his run at the last second and executing the most impudent of finishing touches. A delicate chip, straight down the middle, gracefully arcing over the line as Sepp Maier, already committed to his bottom left hand dive, looked on helplessly. That calm exterior draining from the taker’s body, replaced by pure, unadulterated joy at having sealed his country’s first major trophy. The brass bollocks on the lad.

It wasn’t just an audacious means to a triumphant end, though. Panenka’s trophy winning penalty was the climax of two years of practice, which began after a game for Bohemians against Viktoria Plzen in which the midfielder missed from the spot twice. Afterwards, he made a deal with goalkeeper Zdenek Hruska to stay after training each day and practice, betting beer and chocolate on the result of each spot kick. After spending a while trying to guess which way the keeper would dive, Panenka discovered that shooting straight down the middle was the safest bet, particulalry if he could fool his opposite number with his run-up. “I began using it, trying it usually five or six times per week until it was almost natural to me. The advantage was that nobody expected a shot down the middle, but I saw it as the simplest way to score.”

And so The Panenka was born. Used in World Cup Finals and lower leagues alike with differing results, the mercurial Czech now has his name written into the game. Sadly his moustache has fallen out of fashion.

After the peaceful dissolution of Czechoslovakia in 1993, the qualifying campaign for Euro ’96 marked the debuts of the two independent nations on the international football stage. Slovakia, drawn in a tricky group with France and Romania, eventually missed out, whilst neighbours the Czech Republic sent a warning shot to the rest of the continent. Just seven months after their first international under the new banner, the Czechs kicked off their campaign with a 6-1 win against Malta and, despite some shock results including a 1-0 defeat to Luxembourg, impressive wins at home to the Netherlands and Norway saw them top Group 5.

After arriving at their Lancashire base ahead of the tournament, Dušan Uhrin arranged a bizarre pre-tournament friendly with Unibond League champions Bamber Bridge, and 2,300 fans crammed into the non-league side’s Irongate stadium to catch a glimpse of one of the tournament’s most unknown quantities. If anything the 9-0 scoreline flattered the Brig, though it did offer an insight into the capabilities of a Czech squad that featured just one English based player in Newcastle’s Pavel Srnicek. The rest of the squad was largely made up of Czech based players, with a handful including the stalwart defender Miroslav Kadlec and promising winger Patrik Berger having made the move to Germany, adding an extra frisson to their opening game of the tournament against the two-time European Championship winners. A battling display resulted in a 2-0 defeat and, with Italy beating Russia in the group’s other game, Uhrin’s team were immediately up against it. Heartfelt gratitude would be extended to Italy’s master of masochism Arrigo Sacchi who, in preparation of the meeting with Germany, rotated half of his team and watched in horror as goals from Pavel Nedved and Radek Bejbl sealed the win for the Czechs. Three points each in the race for second place, with the underwhelming Russians at Anfield next.

The equation for Uhrin and his team was simple – match or better the Italian’s result and they’d head into the quarter-finals. It looked like being a stress-free night at the office when, after just five minutes, towering centre-back Jan Suchopárek nodded in from a corner to put the Czechs in front. News of a missed Gianfranco Zola penalty in the game at Old Trafford would have further buoyed the underdogs, and when Pavel Kuka added a second in the 19th minute with a looping header, their place in the next round looked all but assured. Then, as if their half-time team-talk had consisted of the “Take it easy” option in Football Manager, things started to unravel. Four minutes after the break Aleksandr Mostovoi, future tormentor of Liverpool, pulled a goal back. The Celta Vigo midfielder was heavily involved in the equaliser minutes later, as full-back Omari Tetradze reacted first to a rebound to fire past Petr Kouba. In the other game, Germany were reduced to ten men after a studs up challenge from Thomas Strunz, as Italy continued to throw il lavandino della cucina at Andreas Kopke’s goal. But five minutes from time Italian prayers appeared to be answered, as Vladimir Beschastnykh smashed an effort into the top corner from thirty yards, leading to an eruption of celebrations in the Old Trafford stands. Back at Anfield, the Czechs threw everyone into attack. In stoppage time a hefty boot forwards bounced invitingly on the edge of the Russian penalty area, and Vladimir Smicer arrived to arrow it into the bottom corner and break Italian hearts.

The Czech’s journey did not end there, of course. Portugal were dispatched in the quarter-final thanks to Karel Poborsky’s iconic lob, before a penalty shootout victory over France in the semi-final set up a rematch of the 1976 European Championships final. This time though, Germany would have the last laugh, as Oliver Bierhoff’s Golden Goal won the trophy for Berti Vogts’ team. Still, the Czech Republic won the hearts of the watching world in the summer of ’96, and that cast of largely unknown quantities were soon earning their fame and fortune across the continent. In the wake of the tournament, six of the Czech squad left their homeland to play in Europe’s major leagues, most notably Pavel Nedved, whose thirteen year career in Serie A with Lazio and Juventus would harvest three league titles, two Coppa Italias and two European trophies, along with the 2003 Ballon D’or. Patrik Berger made a name for himself at Liverpool, Poborsky became a byword for ill-fated post-tournament signings and, after a spell in France with Lens, Smicer would return to the scene of his historic goal against Russia to spend six years with Liverpool, culminating in the second of the Reds three goals in the Champions League final against AC Milan in Istanbul, along with what turned out to be the winning penalty in the shootout. Italians must really hate him.