On the 29th March 2019, the United Kingdom is (currently) scheduled to exit the European Union. To celebrate forty-six years of peacetime and prosperity in Europe, this season we’ll be profiling the footballing history of each remaining member of the EU, looking at some of their most iconic matches and the players that have left a lasting impression on the game. After eight centuries under Swedish rule, and another as a Russian Grand Duchy,  the subject of this week’s love letter finally gained independence in 1917, though one hundred and one years later they’re still waiting to become a football superpower. Thankfully, the last century has provided some memorable moments, and one world class player in particular. From Rovaniemi to Helsinki – This is Finland. 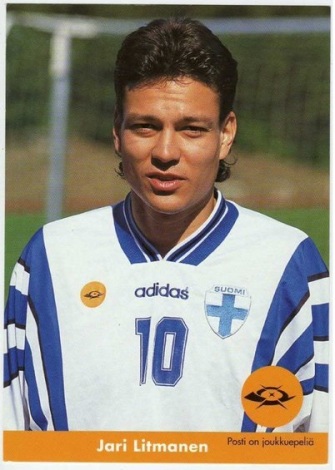 George Weah, Patrick Kluivert, Brian Laudrup, Jari Litmanen. A raft of 90s greats, who all arrived in the Premier League late in their careers to remind English football fans of what they’d missed out on. Unlike the out-of-shape Kluivert or disinterested Laudrup though, Litmanen oozed class in a Liverpool shirt during his season at Anfield at the turn of the century, despite being limited to only  a handful of appearances thanks to Gerard Houllier’s preference for Emile Heskey. Having joined the Reds from Barcelona, where his failure to adapt to life in Catalonia had seen Rivaldo oust him from the team, the steady slope towards retirement began for a player christened ‘Kuningas’. Flitting between Finland, Germany and West London, spells with hometown team Lahti and HJK Helsinki brought the curtain down on Litmanen’s career. The King was dead. Long live The King.

It had all began in Lahti where, as a sixteen year old, Litmanen made his debut for Reipas in 1987. His father Olavi had represented Finland at international level, and spent his entire career with Reipas, but Litmanen junior was bitten by a wanderlust that would foreshadow the nomadic end to his career. After four years of establishing himself in the first team and earning a call up to the national side, Finland’s biggest club came calling, and a year with HJK brought sixteen goals in the Veikkausliiga. There remained an itch in the young striker’s feet, and another transfer followed, joining MyPa in the industrial surroundings of Kouvola. It was here that Litmanen would finally get his break, scoring in the 1992 Finnish Cup final to win MyPa their first major trophy, all the while being watched by scouts from Ajax Amsterdam.

Initially kept out of the Ajax team by Dutch golden boy Dennis Bergkamp, Litmanen’s time to shine arrived when Internazionale prised Bergkamp away from De Meer. Having impressed an initially sceptical Louis van Gaal with his cameo appearances the previous season, Litmanen was pronouced the heir to Bergkamp’s throne, awarded the number ten shirt, and thrust in the hole just behind the striker, the weight of Amsterdam on his shoulders. Twenty-two years old and a long way from home, the Finn refused to be fazed by this newfound expectation. He finished his first full season at Ajax as Eredivisie top scorer, winning the league title and being named Footballer of the Year to boot. The King had arrived, and things would only get better.

The following season, Ajax emphatically retained the league title, going the whole season unbeaten and plundering 106 goals, seventeen scored and plenty more created by Litmanen. Domestic dominance, though, was just the tip of the iceberg. The Dutch giants’ return to the European Cup began with a bang, as Fabio Capello’s Milan, holders and conquerors of Cruyff’s Dream Team months earlier, were swatted aside in the opening game of the group stage, with Ajax’s #10 rounding off a 2-0 win. In the return fixture at the San Siro, Litmanen was on the scoresheet again, taking just two minutes to put the visitors in control, as van Gaal’s team cantered to top spot in the group. Hajduk Split provided little resistence in the quarter-finals, before Bayern Munich were put to the sword in Amsterdam – a Litmanen double setting de Godenzonen on their way to a seismic 5-2 victory, and more importantly a third meeting with Milan in the Champions League final. A frustrating night for Ajax’s playmaker saw him substituted in the 70th minute, but Kluivert’s winner five minutes from time deservedly won the trophy for the Dutch side. The pinnacle had been reached, though mercifully a plateu would follow. In 95/96 Litmanen was crucial to another Ajax league title, and his nine goals in the Champions League saw van Gaal lead his team out in the final against Juventus, but a second double wasn’t on the cards. Despite equalising Fabrizio Ravanelli’s goal and scoring in the shootout, Litmanen would watch Sonny Silooy miss the crucial penalty to send the European Cup to Turin.

Though one of the last to leave, the Finn was part of the mass exodus from Ajax that followed the defeat to Juventus, with players departing for the richer surroundings of Spain and Italy, as van Gaal attempted to build his new-look Barcelona around his trusted creator-in-chief. It didn’t work out at the Camp Nou for Jari Litmanen, but his place in European football history is assured, and as the most capped player and highest goalscorer for his country, the legend of ‘Litti’ seems unlikely to be surpassed in Finland.

Success on the international stage has always been an unfamiliar mistress for the Finnish national team. Besides the occasional push towards the fringes of qualification, most notably for Euro 2008 when they finished three points behind Portugal, The Eagle-Owls have fallen into that middle ground of nations for whom a major tournament is a pipe-dream, and pulling off the occasional surprise result represents achievement.  The Nordic Football Championship, which ran sporadically between 1924 and 2001, provided the nations of northern Europe an opportunity to play semi-regular fixtures close to home, giving players the opportunity to test themselves in competitive conditions. Initially set up by the Dansk Boldspil-Union and featuring just Denmark, Sweden and Norway, the Svenska Fotbollsförbundet resurrected the tournament for its second edition in 1929, inviting Finland to participate. From 1933 to 1985, only two sides were crowned winners, as Sweden dominated the first forty years of the competition, before the emergence of Denmark’s famous team of Michael Laudrup and Preben Elkjaer carried off the trophy in the 80s. In all but one of the first thirteen editions, Finland finished fourth from four.

With qualifiers, friendlies and tournaments beginning to fill up the international calendar, the Nordic Football Championship was shelved for fifteen years, brought back one final time to celebrate the turn of the century in 2000. Iceland and the Faroe Islands, not previously considered worthwhile additions to the tournament, were invited for the last edition, which was split between La Manga in Spain and the competing nations. Beginning in Februrary 2000, joint-favourites Denmark quickly dropped out of the running to win their third successive NM by losing their first three fixtures with a squad largely made up of domestic-based players. Iceland were the surprise front-runners come the end of the first session, with Stoke City striker Ríkharður Daðason helping himself to three goals as the so-called minnows took seven points from their opening three games. Sweden and Norway were in the chasing pack with four and five points respectively, while Finland sat in second on six points, thanks to a late Vesa Vasara winner against the Danes.

The competition resumed after Euro 2000, a tournament for which Denmark, Sweden and Norway all qualified but failed to get out of the groups. The Swedes’ misery was compounded as a late Helgi Sigurdsson penalty for Iceland left their hopes of winning the final Nordic Football Championship hanging by a thread. Finland, though, remained in contention thanks to an outstanding performance against Norway, with a double from Jari Litmanen setting Antti Muurinen’s side on their way to a 3-1 victory. That result would be futile if Iceland could secure victory against a Danish side who’d returned to the competition much-strengthened. In the event, goals from Jon Dahl Tomasson and Morten Bisgaard were enough to see the Icelandics finish their campaign with a defeat, and leave destiny out of their hands.

Any lingering hopes for Sweden to win the tournament were dashed with a surprising 0-0 draw against the Faroe Islands – the only points the minnows would pick up throughout the competition – leaving just two teams in contention. Iceland still sat top of the table on ten points, having played all their matches, while Finland were in second with nine points and a superior goal difference. Though a daunting trip to Sweden lay in wait, all the Finns had to do was draw to earn their first ever piece of international silverware. Shorn of key players Litmanen and Shefki Kuqi, Muurinen was forced to play cautiously against an experimental Swedish side featuring Championship Manager favourites Kennedy Bakircioglu and Kim Kallstrom, alongside a 20 year old striker from Malmo by the name of Zlatan Ibrahimovic. A tense and tight affair was decided eight minutes before half-time, as FC Jokerit midfielder Timo Marjamaa arrived into the box to score the only goal of the game, earning Finland only their second victory on Swedish soil, and most importantly crowning them the last ever winners of the Nordic Football Championship.

Finland took that good form in to the qualifiers for the 2002 World Cup, finishing third in a difficult group, and earning draws home and away against eventual finalists Germany. Though yet to make it to a major tournament, Finnish fans can still take pride in the triumph over their more illustrious neighbours, and their everlasting status at the Nordic Football Champions.