Skip to content
Posted on March 27, 2020 by That's Liquid Football

So far this season we’ve been fortunate enough to host Podcast Royalty, a Match of the Day Mensch, Poets, Comedians, and a host of football writing’s most fascinating voices. Today, however, we’re extremely pleased and proud to welcome Lincoln City chairman Clive Nates to discuss Losing his Favourite Game.

Clive joined the Lincoln City board in February 2016 and was elected Chairman in June 2018. Through Sportvest Capital LLP, a vehicle Clive formed with Sean Melnick and Ashley Mendelowitz to specifically invest in Lincoln City Holdings, they effectively hold the largest interest in the club.

Although Clive has lived in South Africa all his life he has been a keen follower of English football from a child and in particular a passionate fan of Everton since the late 1960’s. It was through an alliance between Everton and Lincoln City in 2002 that Clive began following the Imps.

Clive has been a regular visitor to the UK, even before his formal interest in Lincoln City, having seen both of his children study at English universities as well as to regularly  watch his favourite football teams.

Today, Clive talks us through the day his new charges travelled to the home of his boyhood heroes, and came close to pulling off another major shock in the cup. 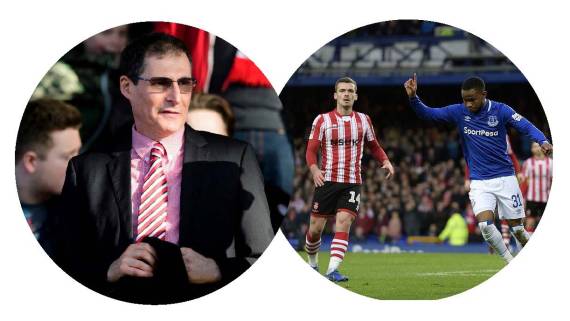 I have been an Everton for more than 50 years so it’s somewhat surreal that losing my favourite game was at the hands of Everton at Goodison Park. As a football obsessed kid growing up in South Africa it was a necessity to also support an English club and as Alan Ball, the youngest member of England’s 1966 World Cup winning team, was my hero Everton became my team.

I would imagine its different now for foreign fans brought up largely on Premier League football but I was always interested and intrigued by the whole English Football Pyramid, the annual promotion and relegation battles across the leagues, and the romance of the Cup competitions. It was in 2002 that Everton formed an alliance with Lincoln City largely based around community work although there was also mention of a young Wayne Rooney being sent on loan to the Imps. Unfortunately nothing materialised from that relationship with Lincoln City going into administration soon thereafter and both clubs seeing managerial changes.

For some strange reason I continued to keep an eye on the Imps and that only increased when they were relegated out of the Football League in 2011. When I decided to embark on the crazy idea of investing in an English football club, the number one item on my bucket list, Lincoln City was the obvious choice and hence I became a director and shareholder in February 2016 and subsequently Chairman in June 2018.

For three years after I retired I traded global equity markets for myself. It was towards the end of 2014 I decided that with my youngest child finishing school I was either going to return to hedge fund management or tick off that number one item on my bucket list, getting involved with an English football club. The family had a trip planned to visit the UK in May 2015 for my daughters graduation and it was my intention to go a little earlier to visit Lincoln for the first time and watch the final game of their season. However, these plans were pre-empted by an announcement from the club in January that their bank was looking to withdraw their overdraft and loan facilities. I thus decided to get in contact with the club earlier than planned and after being put in touch with the then Chairman Bob Dorrian I flew over in March and spent a week in Lincoln. It took nearly a year to finalise my investment in the club. During that period two friends decided to join with me and we formed an LLP, Sportvest Capital, to pool our investment in Lincoln City.

Lincoln City had embarked on an incredible FA Cup run in 2016/17 which saw them become the first non-league team in more than a 100 years to reach the quarter-finals of the FA Cup. It was therefore with some anticipation that Imps fans looked forward to the third round draw in December 2018. Amazingly Everton were drawn at home against Lincoln City.

With the game not being chosen for TV coverage it was scheduled for a normal 3pm kick-off on the first Saturday of 2019. The whole lead up to the game was incredibly special – staying over at the team hotel in Liverpool on the Friday night, mixing with our fans at the Weatherspoon’s Pub on Concert Square on the Saturday morning and then being fantastically hosted in the Everton board room by Bill Kenwright and Denise Barrett-Baxendale. It was also a great opportunity to meet with former Everton stars Graeme Sharp and Graham Stuart.

Everton were generous with their allocation to our fans and more than 5,500 Imps fans travelled to a sellout Goodison Park. With only one win in their previous eight games Everton manager Marco Silva was under pressure and consequently fielded a strong line-up. Within 15 minutes Everton were two up through Lookman and Bernard and had further chances to increase their lead shortly thereafter. It looked like it would be a very long afternoon to endure. However on 28 minutes the Imps were back in the game with a goal from Michael Bostwick, Everton characteristically conceding from a free-kick.

I wondered how I would feel during the game with my two teams playing each other. Once the game started however there was only one team I was supporting and when Lincoln scored I was spontaneously on my feet cheering. For the first time in over half a century I was supporting Everton’s opponents and it seemed completely natural. I might have taken a little flack on social media for saying I was going to buy a half-and-half scarf (the first and only time I would consider buying such a scarf) but there was no doubt about my allegiance on the day.

After Lincoln pulled a goal back Everton’s early composure and control dissipated and worried Silva sufficiently for him to make a double change at half time including the introduction of Andre Gomes. I remarked to Bill Kenwright across the aisle that this was distinctly unfair. With Lincoln staying in the game throughout the second half we were paid the ultimate compliment with Silva bringing on Richarlison for the last 10 minutes.

We didn’t quite manage to get Everton back to Goodison Park for a replay but it was a day to remember for the rest of my life. I did however get to see Everton visit Sincil Bank seven months later when Lincoln City were drawn against them in the second round of the Carabao Cup. It was a chance now to host Bill, Denise and Marcel Brands in our boardroom and although Everton won again we did ourselves proud, losing through two late goals in an exciting 4-2 encounter.

Although our FA Cup run ended in the third round the share of the ticket money helped boost our transfer pot in that window which helped us achieve the objective for the season, promotion to League 1 for the first time in 21 years.

I couldn’t have hoped for a more remarkable first four years of involvement in English football. Lincoln City is undoubtedly now my primary focus but I hope for many more visits to Goodison Park in the future just as an Everton fan.

Thanks to Clive for being so generous with his time and sharing his memories of Lincoln City’s trip to Goodison Park. You can follow Clive on Twitter.