It starts with that familiar feeling. Nerves and excitement intermingle. You’re counting down the hours at work, checking the clock every few minutes. Time seemingly standing still, then…the sweet release, the idle hours between leaving the office and arriving at the pub you’ve agreed on beforehand. Apprehension. The fear of disappointment. You flash into the future – visions of hazy days riding on open top buses.

Then it’s 7.40pm. It’s time to go. You get to the pub, but you can’t see them yet. Get yourself a drink. A leveler. Something to calm the jitters. Steady yourself. Suddenly they’re there and the next two hours fly by. You’re laughing within minutes. “Let’s spend the weekend together” they say. And after the evening you just spent with them all you can say is “YES PLEASE”.

You wake at midday – head fuzzy from the night before. You spend the day together telling stories that go back and forth. Tales of last minute reprieves, tales of the unbelievable, tales of the first time. And as the sun goes down and the day unwinds you can’t help but feel tainted by sadness. The next day you notice self-inflicted wounds, a red rash, and you collapse. They’ve gone and you feel battered and bruised but you’re not sure if you can wait another week to see them again. That’s right – the football’s back.

The 2017/2018 Premier League season kicked off on Friday night at the Emirates Stadium as Arsenal took on Leicester City keen to put last season’s disappointing finish behind them. New boy Alexandre Lacazette led the line and took less than 180 seconds to open his account, glancing Elneny’s cross past Kasper Schmeichel. ‘Arsenal are back!’ screamed the faithful of Ashburton Grove, and misty-eyed visions of Laurent Koscielny lifting the Premier League trophy in 10 months time were still clouding the eyes of supporters when Harry Maguire, resembling a purpose built block of luxury apartments, nodded a cross into the path of Shinji Okazaki, who thrust his 4ft 7in frame above Arsenal’s defence for the equaliser. It was probably around this time that Arsene Wenger was beginning to wonder whether fielding two left-backs at central defence (and none at left-back) might render his backline susceptible to aerial attacks. The sight of Marc Albrighton swinging a peach of a cross onto the right boot of Jamie Vardy just before the half hour mark had the water bottles in the dugout out trembling, but Arsenal went in at the break level, having resorted to trying to walk the ball in, dat guy Danny Welbeck the beneficiary.

Shortly after half-time Leicester retook the lead, pipsqueak Jamie Vardy rising like the proverbial salmon to head home from a corner. Arsenal TV set phasers to ‘Overreact’, and pre-heated their oven for Wenger’s goose. But Sky have paid the big bucks for the right to broadcast Premier League football, and they weren’t going anywhere without a pint of 7% ABV Narrative. Aaron Ramsey, thankfully having secured himself a new hairdresser over the summer, brought Arsenal level, and two minutes later Olivier Giroud crashed a header in off the underside of the bar to give Arsenal all three points.

The early kick off on Saturday pipped First Name Second Name’s Watford against Liverpool, who’s manager hadn’t quite worked off the excesses of the night before if his gurning throughout the first half was anything to go by. Klopp had every right to be unhappy, seeing his side twice go behind to goals from Stefan Okaka and Abdoulaye Doukore, sandwiching an equaliser from Sadio Mane. In the second half Liverpool took control, and a penalty from Firmino and tap-in from Mo Salah put the reds in front. From then on it looked like a case of how many, as Watford struggled to stem the red tide from Klopp’s men straight from the kick off. Come stoppage time, the Hornets began to put some pressure on and, having introduced Rivaldo’s regen, they managed to sneak a contentious equaliser through Miguel Britos. Klopp stood on the touchline smirking at the decision, because he’s just a chilled out entertainer, but the controversial nature of Watford’s third should not gloss over a poor performance from Liverpool’s backline. Simon Mignolet will fall under the microscope again having conceded three goals within his six yard box.

The 3pm kick-offs on Saturday offered a platter that, at first glance, resembled the kind of beige buffet you pick up at Iceland for a fiver. The prawn ring of the piece took place at Stamford Bridge as defending champions Chelsea paraded their Premier League trophy ahead of the game, then preceded to soil themselves in front of it for 45 minutes. Burnley raced into a 3-0 lead after Gary Cahill had been given his marching orders for a studs-up challenge. Chelsea players and fans alike displayed an amusing sense of self-entitlement as Cesc Fabregas saw red for two acts of petulance. The Blues did manage to pull two goals back through Morata and Luiz – the former making an immediate impact after his late introduction. But all credit to Burnley who capitalised on their hosts lack of discipline, and arguably could have left with a more handsome margin of victory. 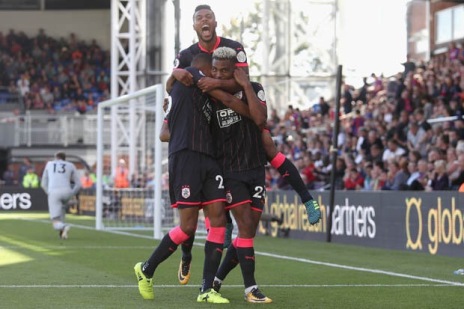 The other big story of the day came at Selhurst Park where newly promoted Huddersfield Town put three past a Crystal Palace team that still don’t look sure about the system new manager Frank de Boer has asked them to play. Summer signing Steve Mounie helping himself to two goals for the Terriers. Wayne Rooney scored on his second Everton debut to secure a 1-0 against Stoke City. West Bromwich Albion also won 1-0, beating Bournemouth thanks to Ahmed Hegazi’s header. In the other 3pm kick off, Mauricio Pellegrino took time out from his shift at the big Sainsbury’s to watch his new team Southampton register a goalless draw against Swansea City.

Onto Saturday evening then, and a first taste of Premier League football for the Amex Stadium. I must say, its refreshing in these times of mad money and gaudy splendour to see a venue steeped in so much history finally host a team with such a rich and successful legacy. Brighton and Hove Albion vs Manchester City. The Have-Not’s Who Borrowed Too Much And Had To Be Bailed Out vs The Didn’t Used To Have But Now Do Have And Eh Why Haven’t We Won A Trophy For Two Years? I jest of course – Brighton promise to be a breath of fresh air this season, but against the Citizens they froze. Besides a short spell in the second half where Davy Propper hit the bar it was all but one way traffic. It was a long time coming but when Sergio Aguero opened the scoring on 70 minutes, there was a sense that City could capitalise on their hosts deflation. A Lewis Dunk own-goal completed the 2-0 win for City, who will have to be far less profligate if they’re to meet pre-season expectations.

Sunday saw the curtain raised at St James’ Park, where newly promoted Newcastle United took on Tottenham Hotspur. The host’s last game at this level had been the 5-1 shellacking handed out to Spurs at the end of the 15/16 season, but very quickly it became apparent a similar scoreline wouldn’t be on the cards as Tottenham controlled the game but searched in vain for a killer pass. Injuries to Paul Dummett and new boy Florian Lejeune did nothing to aid Newcastle’s cause, and when Jonjo Shelvey got himself sent off for a ludicrous stamp on serial irritant Dele Alli the writing was on the wall. Goals from Alli and moderately paid Ben Davies sealed a 2-0 win for Spurs, but the longer lasting effects on key personnel could see Newcastle struggle into September. 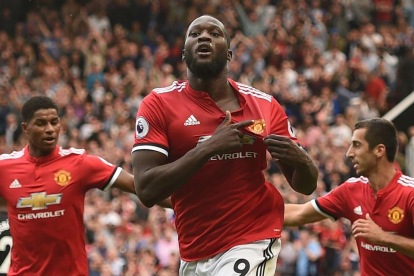 And so it fell to Manchester United and West Ham to serve up a feast for the last game of the weekend. Much attention was placed on the £115m pair of Romelu Lukaku and Nemanja Matic, while West Ham showcased four new signings in Joe Hart, Pablo Zabaleta, Marko Arnautovic, and ex-Man Utd forward Javier Hernandez. Still insisting on wearing his nickname on the back of his shirt despite being a proper grown-up now, Hernandez had a quiet afternoon as the hosts laid siege to Hart’s goal. Two debut goals for Lukakau, and one-a-piece for Anthony Martial and Paul Pogba left the opposing ‘keeper look as if the weight of the world was on his Head & Shoulders, and the premature ejaculation from TalkSport presenters could begin in earnest. ‘Manchester United for the title!’ they screeched, whilst simultaneously trying to wind up fans of any other football club to sate their greed for advert revenue.

It’s early days, and any think pieces being written about conclusions we can make for the season ahead are obviously mental – but Manchester United look far more clinical than last year, Chelsea will need to realise they can’t just show up to win football matches, Liverpool need to have a good long search down the back of the sofa to cough up for an assured central defender, Newcastle could do with a Qatari sugardaddy right about now, and Huddersfield won’t have many easier afternoons than their Premier League debut. Football’s back, and it’s the gift that keeps on giving.