The Football League Trophy was conceived as an opportunity to provide cup football for the teams in the lower tiers of the football league who traditionally have not troubled the later rounds of the League and FA Cup. An opportunity to retain an interest away from the humdrum of weekly visits to the likes to Torquay and Darlington, it would also give supporters of the less glamorous clubs a chance to see their side play at Wembley, and potentially lift a trophy there. Whilst this is very much still the case, the farcical change in format at the beginning of last season has seen the competition come under scrutiny, and the tournament newcomers appear to be stretching the rulebook to meet their needs at any opportunity. As with the Carabao Cup, have the EFL sold the soul of one of their flagship competitions to their Premier League paymasters?

“The history of the EFL Trophy is one of new ideas and innovation, but at its heart has always been the belief that this is an opportunity for League One and League Two clubs to taste cup success, I am therefore delighted to see the backing the Checkatrade Trophy has received from our clubs for the next two seasons, following a full and comprehensive review of this year’s pilot format.” EFL Chief Executive Shaun Harvey’s statement following the announcement at the end of last season that the one-year pilot of allowing clubs from the top two tiers enter academy teams into the EFL Trophy rang triumphant. The idea had originally been floated as an opportunity for promising young players at bigger clubs to gain experience in competitive matches, but when first introduced was not met with universal approval. After the initial announcement ahead of the 2016/17 season, the Football Supporters’ Federation released a statement damning the decision, saying that “Fans have told us that it undermines the integrity of the competition, and feel that ‘their’ competition, and the chance of a potential day out at Wembley (for the final), is being taken away from them by Premier League clubs.” The consensus among the chairmen of clubs in Leagues One and Two was that the Trophy did require a shake-up, but support for the inclusion of academy sides wasn’t unanimous. AFC Wimbledon and Accrington Stanley in particular were dead against the decision, with Stanley’s Managing Director David Burgess suggesting there was no ‘real enthusiasm’ for ‘reserve-team’ football. Other clubs were more sanguine about the change, with Walsall, Oxford United and Exeter City all vociferous in their support for the new format – undoubtedly with pound signs in their eyes. The prize money ahead of the revamped tournament had been announced as £1.95m – an incredible 300% rise from the £480,000 offered the previous season. That prize money – that gets shared out to teams that reach the quarter finals – was promised to rise again this season, giving more than a little added incentive for club chairmen to vote for a second season of the new format. The reported prize money now stands at £3m, a massive shot in the arm for clubs toiling at the bottom rung of the football league, but tantamount to bribery by the EFL in an attempt the cosy up to the Premier League.

Sixteen Premier League and Championship clubs were invited to enter their academy teams into the tournament last season including Chelsea, Everton, Swansea City and West Ham. In the event, only Swansea made it to the quarter-finals and a share of the prize money, before being knocked out on penalties by eventual winners Coventry City. This season, Manchester City and Tottenham Hotspur’s academies were among the new additions to the competition, though both finished bottom of their groups. The last remaining academies vying for a place in the quarter-finals when the competition resumes in January are Chelsea and Leicester – though they had more than a little help getting this far. As part of the shake-up, the academy teams would be allowed to field five players over the age of 21 – which quickly undermined the suggestion that the format change was solely to aid youth players – and, with the competition laying low for a while, it hit the headlines again last week thanks to Premier League sides making the most of the lax rules on team selection. On the Tuesday night, Leicester City’s U21 squad travelled to Scunthope United, and named Ben Hamer, Yohan Benalouane, Aleksander Dragovic, Daniel Amartey and Leonardo Ulloa as their overage players – all of whom have appeared for the Leicester first team this season. Ulloa’s partner in attack was Kelechi Iheanacho – a £25m summer signing from Manchester City. While Iheanacho fits the age criteria, the idea that he needs a game at Scunthorpe to develop is ludicrous. In the event it was youngsters George Thomas and Sam Hughes that scored the goals to seal a 2-1 win for the Foxes. The following evening Chelsea U21s travelled to MK Dons, and their lineup demonstrated the cream of their academy – Dujon Sterling, Trevor Chalobah, Ethan Ampadu and Charly Musonda all highly-rated youngsters that will benefit from this type of game. Oh, they also named Michy Batshuayi, a £33m Belgium international striker, up front. Batshuayi had been in action 24 hours earlier against Atletico Madrid in the Champions League. Unsurprisingly he scored twice in a 4-0 win, leaving Dons manager Robbie Neilson scratching his head. 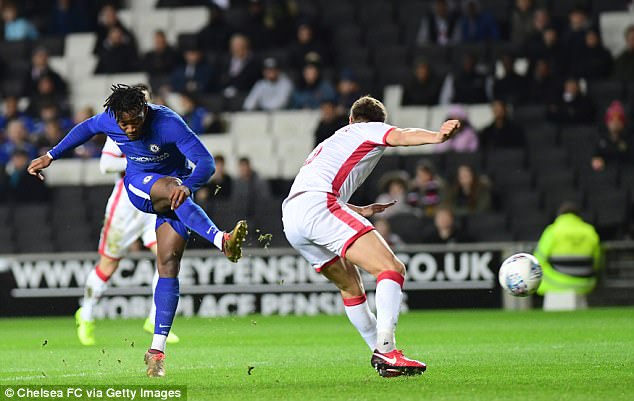 The EFL’s insistence that the tournament revamp was undertaken with the promotion of young players in mind also falters when the competition rules are scrutinised. The Checkatrade Trophy Regulations states that: ‘Each EFL Club shall play its Full Available Strength in and during all Matches. Full Available Strength means the EFL Club must include at least four Qualifying Players in the ten outfield players named in the starting eleven on the Team Sheet.  Qualifying Player means any Player who: had started the immediately preceding First Team Fixture; subsequently starts the immediately following First Team Fixture; is in the list of ten Players at the Club with the highest number of starting appearances in First Team Fixtures in the same Season; has made forty or more starting appearances in First Team Fixtures or international equivalents (and not limited to the same Club or Season); or is on standard loan from a Premier League Club or any EFL Club operating a Category 1 Academy. So not only were League One and Two clubs expected to partake in the competition, they would have to use at least four of their first team players in order to toe the line – perhaps Leicester City misread the rulebook ahead of their game last week. For some the temptation to rebel was too strong, and soon enough fines were being doled out to teams daring to contravene the sacrosanct regulations. In November 2016, fifteen clubs were hit with fines ranging from £3,000 to £15,000. One of the teams given the maximum fine was Luton Town, who failed to field the requisite four ‘first-team’ players, but did manage to name nine academy graduates in their side that beat League One Gillingham. Chief Executive Gary Sweet was quick to argue “While we don’t feel we should be paying ‘fees’ to get our youngsters experience, we view that as an investment in their development. We are staggered, however, that we have been fined the maximum amount for our first offence, which was winning away from home at a club from the division above with half-a-dozen first-team regulars in their team.” Bradford City received a more lenient fine despite substituting their first team goalkeeper in the third minute, having named him in the starting lineup as one of the senior players. Shaun Harvey hit back at suggestions that academy teams were being given preferential treatment, stating that without senior players from the lower leagues competing in the competition, the academy players from Premier League and Championship clubs aren’t truly being exposed to competitive senior football. Which begs the question – who is this tournament for now?

The Football League Trophy was introduced in 1984, originally as the Associate Member’s Cup, for teams in the third and fourth tier to compete in a regional cup competition that ended with silverware and, from 1985, a final at Wembley. Division Three Bournemouth won the inaugural trophy, while Wigan Athletic, also in Division Three, won the first Wembley final with a 20 year old Mike Newell opening the scoring against Brentford. For more than thirty years it has given fans an opportunity to dream of a day out at the national stadium, often attracting enormous crowds – last year’s final between Coventry City and Oxford United saw nearly 75,000 fans descend on Wembley, whilst 1988’s final between Burnley and Wolves garnered an attendance of over 80,000 – less than 20,000 shy of the corresponding FA Cup final between Liverpool and Wimbledon.

Whilst it has generally always been considered low importance in the scheme of football competitions, average attendances in the last decade have generally been good – the average attendance across the whole competition hovering around the 4,500 mark whilst the lowest attendance per season rarely dropped below 700. In the last two seasons fans have voted with their feet. In the first season of the academy experiment the average attendance dropped to just below 2,000, while just 274 people turned up to watch West Brom U23s take on Gillingham. This season the average is lower – less than 1,400, while the lowest attendance came at Blundell Park as 248 turned up to watch Grimsby Town take on Sunderland U23s – just three of those had travelled to support the away team. The drop in attendances is not surprising – this is essentially reserve football now, and unless your team is in the quarter finals, there’s no financial reward in taking part. Like any competition, the closer a team gets to a trophy the more invested their supporters become, but turning up on a freezing cold December evening to watch your second string take on Burnley’s kids is hardly tempting. Indeed, when Carlisle United surveyed 600 of their fans to canvas opinion on the new format of the competition, the response was overwhelmingly negative. 98% of respondents were not in favour of having academy teams in the competition while 78% said that, if they are involved, they shouldn’t be allowed overage players. The strongest notion was that teams from the National League should be invited to participate in the competition ahead of academy teams, and also that the increase in prize money is not enough justification for the change in format. Worse was to follow for Shaun Harvey ahead of this seasons competition when research discovered that only players involved in England’s successful youth teams over the summer actually appeared in the competition last season. Collectively, they amassed 1,008 minutes of football, or 112 minutes each. Comparatively, England U21 midfielder Lewis Baker played 2,907 minutes for Vitesse Arnhem in the Eredivisie during his loan spell from Chelsea.

In its current state, the EFL Trophy is a sarcophagus. Plated with the kind of prize money that could seriously change the fortunes of a team in the lower reaches of the football league, once the lid is lifted and you look inside its nothing but decomposition. If this format becomes the norm, there will surely be a point at which Premier League academies are winning the trophy and taking the prize money with them when they are the least in need. By then the whole exercise will have been exposed for what it is – a complete lack of respect for clubs below the championship, and a pathetic necessity to bend to the Premier League’s every whim. Perhaps the sponsors could recommend someone to tear it down and start all over again.

One thought on “The Checkatrade Atrophy”