Skip to content
Posted on April 1, 2018 by That's Liquid Football

With Paris St Germain now a matter of weeks away from securing the Ligue 1 title and holding a seventeen point lead over second placed Monaco, attention in France has turned to the race at the bottom of the league. While bottom club Metz have looked odds-on to go down for some time, and last season’s Ligue 2 play-off winners Troyes also struggling, it’s the presence of 2011 double-winners Lille OSC that has surprised most keen observers. Poor managerial choices, financial irresponsibility and the long-term effects of an unsustainable transfer model have brought them to this point, but how likely is it that Lille will go down, how did they get to this point, and is it going to get worse before it gets better?

“This evening, I’m hurting for my Lille…remember, stay united and together in the good times just as in the most difficult moments. Go LOSC!” the tweet sent by Eden Hazard in the aftermath of ugly scenes at Lille’s last home game summed up the feelings of many Les Dogues supporters. The draw with Montpellier was marred by a pitch invasion at the end of the game involving hundreds of disgruntled home fans, who streamed onto the pitch at the final whistle and attempted to attack their own players. The club are now awaiting their penalty from the FFF, likely to involve playing at least one home game behind closed doors, and have pledged to hand out punishments to the fans involved. This latest twist brings further unwanted headaches in a desperate season for the north-eastern side.

For those with short memories, Lille are the club that sensationally won the league and cup double in 2011, playing attacking football and nurturing exciting young talent. Throughout the 80s and 90s, the Great Danes were a mainstay in Ligue 1, flipping from season to season between mid-table mediocrity and relegation scraps, before finally being condemned to the drop in 1997. Returning to the top flight in 2000 under Vahid Halilhodžić – currently coaching Japan – Lille restored themselves as Ligue 1 regulars, and began challenging towards the top of the table under Claude Puel. After the whispering Frenchman’s performance attracted the dominant Lyon, the club turned to former player Rudi Garcia, who had slowly been earning a reputation as a promising up and coming coach in the lower leagues with Dijon and Le Mans. Two top five finishes followed – with Garcia’s side outscoring the rest of the league in 2010 – before their historic double winning season. That success was built on a side containing exceptional talent purchased young or brought through the academy – Matthieu Debuchy, Adil Rami, Idrissa Gueye, Yohan Cabaye, Gervinho and most notably a 20 year old Eden Hazard, all played major parts in securing Lille’s first two major trophies since the 1940s, while the pre-season addition of Senegal striker Moussa Sow proved a canny bit of business – arriving on a free, Sow plundered 25 of Lille’s 68 goals on his way to winning the Ligue 1 Golden Boot. With Ludovic Obraniak’s late goal against PSG securing the Coupe de France, Lille added their name to a select group of clubs to have won the French double on more than one occasion, joining Saint Etienne and Marseille – unsurprisingly, PSG have joined those ranks in recent seasons. 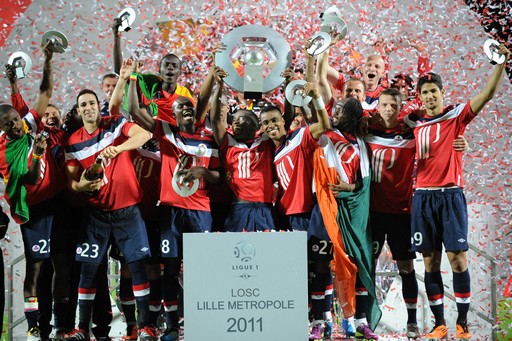 The heightened profile that a league win and subsequent Champions League campaign bring proved a double edged sword for Lille, as slowly but surely their championship winning side were picked off by teams in more illustrious leagues – Gervinho and Cabaye both left for the Premier League and Rami was snapped up by Valencia before the beginning of the following season and, after firing his side to another top three finish, Hazard soon followed in a €40m move to Chelsea. By the time the 2013/14 season kicked off most of the title winning side had left the Grand Stade Lille Métropole, along with manager Rudi Garcia, snapped up by Roma. Former France U21 coach Rene Girard was installed as coach and the Lille talent factory continued to bear fruit – Dimiti Payet, Lucas Digne and Florian Thauvin all came and went, with the club making a profit on all three – and Girard continued Garcia’s good work, finishing third in his first season in charge. In the last couple of seasons, however, the spring of saleable assets has started to run dry, and Lille’s strategy of buying low and selling high has faltered. Last season’s 11th placed finish, the club’s worst for 14 years, was enough to see coach Frédéric Antonetti leave by mutual consent.

Ahead of this season it was all change at the Stade Pierre-Mauroy, as tech investor Gérard Lopez purchased a holding stake in the club from incumbent president Michel Seydoux and appointed the enigmatic Marcelo Bielsa as manager. Touted by some as the most influential coach in the world, Bielsa had made his name in his native Argentina with Newell’s Old Boys and Velez Sarsfield, before taking charge of the Argentina and Chile national teams. His two year spell at Athletic Bilbao, which reaped a Copa Del Rey win and a Europa League final appearance, raised his profile in Europe, and subsequently Bielsa embarked on a bizarre spell in charge of Marseille – resigning after one game of the 2015/16 season due to conflicts with club management. Ahead of his appointment at Lille, Bielsa had spent two days in charge at Lazio in 2016, before quitting over alleged broken promises regarding the club’s transfer policy. Mad as a bag of snakes, this one. Regardless, the addition of Bielsa was seen as a major signal of intent by Lopez, and the new owner handed his manager a €65m kitty to bolster Lille’s squad and restore them at the top end of the table. Bielsa scoured South America and spent around €35m on three young Brazilians – Thiago Mendes, Luiz Araújo, and the highly rated Thiago Maia – as well as a further €10m on Angers’ young winger Nicolas Pepe. Opening the season with a comprehensive 3-0 victory against Claudio Ranieri’s Nantes, Bielsa’s tactical nous looked to be reaping immediate rewards – a bold 3-3-1-3 formation clearly too much for Nantes to deal with – and once again expectations were raised. Unfortunately that was as good as it got for Bielsa, and a run of nine games without a victory saw Les Douges drop into the bottom three, with back to back wins against Saint Etienne and Metz not enough to see them climb out of trouble at the beginning of November, and Bielsa was suspended for poor results after a 3-0 defeat at Amiens in the following game. After three weeks of suspension Bielsa was finally sacked in mid-December, and former player Christophe Galtier was brought in during the winter break. 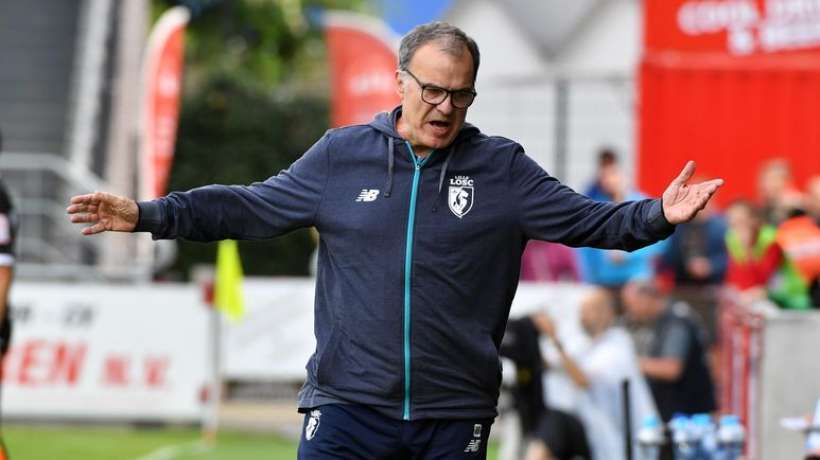 Just two wins since January have hardly helped Lille’s cause, and to further compound their misery financial difficulties have reared their head in recent months. In December the National Directorate of Management Control, French football’s financial watchdog, imposed a transfer ban on the club, meaning they’d be unable to strengthen the squad in the January window. Lopez had hoped that Galtier would be able to alleviate the DNGC’s concerns by offloading players during the window, but there were no interested parties, and the club must now play out the season with the spectre of relegation – regardless of their on-pitch performance – hanging over them. Lopez has been quick to assure supporters that he is doing everything possible to alleviate the concerns of DNGC, but that €30m net spend in the summer may come back to haunt the new owner, while missing out on gate receipts for a game behind closed doors will further hinder Lille’s cause. That a net spend as relatively paltry as €30m could create such financial complications might surprise supporters of Premier League clubs, where that kind of sum is regularly spent on one player, but Ligue 1 is far and away the least lucrative of Europe’s top five leagues. Data from the last twenty years shows slow growth in France, with league revenue this season totaling €1.75bn, roughly a third of the Premier League’s. With the exception of PSG, financially supported by Qatari Sports Investments, the rest of Ligue 1 are unable to compete with their European contemporaries, and have to make do and mend in order to survive – the pillaging of Monaco’s title-winning side last summer is a case in point – by spending beyond their means, Lille’s big gamble on Bielsa has spectacularly backfired.

If Lille are to go down, they won’t be the first league champions to find themselves relegated in the same decade. Blackburn Rovers’ Premier League win in 1995 was followed by three seasons of steady decline before their relegation in 1999, while Atletico Madrid suffered the same four-year collapse, winning La Liga in 1996 and finishing second from bottom in 2000. Even in France, Lille wouldn’t be the first club this century to win the league and subsequently go down, as Nantes’ surprise championship win in 2001 was followed by 2007’s demotion.

Back on the pitch Lille find themselves two points from safety ahead of today’s meeting with Amiens. If they’re to catch Toulouse and survive, they’re going to have to start winning games soon. Trips to Bordeaux and Marseille later this month are unlikely to return many points, but the fixture list is largely on Lille’s side – four of the club’s remaining eight fixtures are against sides in the bottom six, and the trip to Toulouse on 6th May looks crucial. It would be a cruel twist of fate for Les Dogues to achieve survival only to fall on the sword of administration, though it would provide a stark cautionary tale for their contemporaries.