Skip to content
Posted on April 5, 2018 by That's Liquid Football

The 2017/18 season celebrates 25 years of the Premier League. To mark the occasion we’ll be taking a look at some of the more off-kilter moments from each season. Ahead of the 2013/14 season, Sir Alex Ferguson’s illustrious spell at Manchester United came to an end. After 27 years and 13 Premier League titles, the Scotsman had decided that the time was right to pass the baton to a new manager, and was even given the job of choosing his successor. Surely a man of his knowledge and experience wouldn’t get it wrong?

Sir Alex Ferguson’s retirement had been on the cards for a while. With the Manchester United manager rapidly approaching 70, having achieved everything in the game, it was only a matter of time before he hung his big coat up and went cold turkey on the chewing gum to see out his days drinking exquisite red wine and calling every member of the football media “fucking idiots” from the comfort of his settee. Had Sergio Aguero not scored the most dramatic goal in Premier League history at the end of the 2011/12 season, Ferguson may have retired a year earlier, safe in the knowledge that his side were still the best in Manchester, but the Argentinian’s actions were a personal affront to the Scotsman, and he had to give it one more season and go out in style, securing United’s thirteenth Premier League trophy. Whispers surrounding his successor at Old Trafford were regularly splashed across the sports pages, with Jose Mourinho, Pep Guardiola, Carlo Ancellotti and Jurgen Klopp all in the frame to see in the next age of Manchester United. It’s alledged that Ferguson met with each of the aforementioned candidates, only to discover that all of them, in one way or another, were already spoken for. Mourinho was due to leave Real Madrid and re-join Chelsea ahead of the 13/14 season, and Ancellotti was lined up to replace him at the Bernabeu. Guardiola, taking a season off after his transformative spell in charge at Barcelona, would shortly be heading to Bayern Munich, and Jurgen Klopp was dedicated to Borussia Dortmund. It was certainly clear, though, that the calibre of manager in Manchester United’s sights was world class. Someone with European pedigree, a man with a proven track record of winning trophies,  a coach used to working with the best players in the world. Which is why the announcement that David Moyes would become the new Manchester United manager was, actually, quite bizarre.

At the time it sort of made sense. Moyes had built a reputation as a tactically astute, hard-working, and exciting young British coach. After carving out a solid career as a no-nonsense centre-back in Scotland and England, most notably with Preston North End, Moyes took his first management job at Deepdale in 1998, having earned his coaching badges in his early twenties. Having steered the club away from the relegation zone in his first six months, Moyes then guided Preston to promotion from Division Two in his second full season, and almost completed a double promotion as the Lilywhites were beaten in the Division One play-off final by Bolton the following year. That success led to Everton appointing Moyes as Walter Smith’s successor, and in eleven years at Goodison Park, Moyes guided the Toffees to eight top seven finishes, earning the club a place in the Champions League qualifiers in 2005. Working on a limited budget, Moyes earned a reputation as a manager that could get the most from his resources, but the top job at one of the biggest clubs in the world was always going to provide a completely new challenge.

Once appointed, Moyes set about stamping his mark on the club, clearing out the pre-existing coaching staff and bringing in his own team. Despite being armed with a sizable transfer kitty for the first time in his career, Moyes discovered that more money doesn’t necessarily mean fewer problems, as the summer-long pursuits of Cesc Fabregas and Leighton Baines left the new manager frustrated, though he was able to secure the signature of Everton favourite for Marouane Fellaini for £27m on deadline day. Bargain. With a lack of summer signings, Moyes was forced to head into the new season with the squad he’d inherited which, given they’d won the league a few months prior, must have been a drag. Having successfully navigated the Community Shield tie with Championship Wigan Athletic, Moyes took his new charges to Swansea City for a televised game on the opening weekend, and the post-Ferguson era started with a bang. Two goals apiece from Robin Van Persie and Danny Welbeck ensured the best start possible for Moyes, while Wayne Rooney – surrounded by talk of his potential exit given his fractious relationship with the new manager – emerged as a second half substitute to play a part in United’s third and fourth of the afternoon, and a comfortable 4-1 win put them top at the close of play. That was as good as it would get. A goalless draw with Chelsea and a narrow defeat at Anfield hardly had alarm bells ringing, but by the end of September, Manchester United had dropped to 12th place. Soundly beaten in the Manchester derby, the first sign that things might be going spectacularly wrong arrived when United hosted West Bromwich Albion. The visiting Baggies had won their first game of the season the previous week at home to Sunderland, but the chances of them returning back down the M6 with anything seemed slim, particularly since they hadn’t won at Old Trafford since 1978. Morgan Amalfitano gave Steve Clarke’s side a shock lead in the second half, but Wayne Rooney’s equaliser three minutes later had looked to restore sanity to the situation, only for Saido Berhaino to net the winner ten minutes later. The result sent shockwaves through the Premier League, but it wouldn’t be the last time that Moyes would mastermind an historic result for Manchester United. The following week a brace from Adnan Janzuaj, promoted into the first team by Moyes and one of the few bright spots for United in 13/14, secured a 2-1 win over Sunderland that began a seven game run in which it seemed the new man had finally started to make things click. Draws at home to Southampton and away to Cardiff City were disappointing, but victory over Arsenal – Moyes’ first win over a top four rival as United manager – and a hard earned point at Tottenham showed signs of blossoming success for the Moyes era, and the visit of former club Everton was the perfect opportunity for the Glaswegian to prove his mettle.

The history books were in Manchester United’s favour as Roberto Martinez brought his new side to Salford, with the Toffees recording just one victory at Old Trafford in Premier League history – and that came in the second week of the league’s existence. The former Wigan Athletic manager had, however, overseen an excellent start to the season for the blue half of Merseyside, with just one defeat from their opening thirteen games seeing them sitting in fifth place, two points better off than Moyes’ side. By full-time that gap had been extended to five, as luck evaded Moyes and United and, having seen Rooney and Welbeck crash shots against the post, Everton nicked a late winner. Three days later another home game presented the ideal opportunity for Manchester United to get back on track, as Newcastle United arrived at Old Trafford, without in win in their previous 29 visits. You guessed it. Yohan Cabaye’s second half goal earned the Magpies their first win at Old Trafford since 1972, and left United languishing in 9th place. With three of the next four games away from home, United’s form picked up again, and four wins on the bounce left them in sixth place heading into the new year. Tottenham’s victory at Old Trafford on the 2nd January (their second in Premier League history), however, drained supporters’ goodwill and it soon became apparent that Moyes’ card was marked. The addition of Juan Mata in the January transfer window couldn’t help Moyes address his side’s patchy form, and defeats at Chelsea and Stoke City left United with an uphill battle to finish in the top four, with Liverpool sitting seven points ahead.  Two wins and two draws from the next four games couldn’t help narrow the gap, and crunch time approached with Liverpool’s visit becoming a do-or-die fixture. Nemanja Vidic received his customary red card in this fixture, and United conceded THREE penalties, eventually losing 3-0 to a rampant Reds side. Two weeks later Manchester City repeated the scoreline, and United’s season lay in ruins. Finally, after a meek 2-0 surrender at Goodison Park left Manchester United mathematically incapable of qualifying for the Champions League, Moyes was sacked. Ryan Giggs took interim charge for the remainder of the season, as United finished 7th, their lowest league position for 24 years.

So what went wrong? In the aftermath of Moyes’ sacking, Ferguson was quick to remind those laying the blame at his door that his fellow countryman was NOT his first choice as manager and, had any of those elite European coaches been available then the Everton manager would never have been approached. There is an argument that the squad Ferguson left for his successor left much to be desired. With the central defensive pairing of Vidic and Ferdinand both creaking towards the end of their careers, sharing a combined age of 67, the comparatively inexperienced duo of Phil Jones and Chris Smalling were regularly called upon to fill in, while up front Robin Van Persie was arguably past his peak, and Wayne Rooney continued to prove a disruptive influence off the pitch. Even so, it was Moyes’ lethargy in the transfer market that left the writing on the wall – the overpayment for Fellaini looking more and more like the panic buy it was as the season wore on, as Moyes failed to identify his top targets in good time. The insistence of clearing out the coaching staff also hampered the manager, as Mike Phelan, Rene Meulensteen and Eric Steele were all replaced by the backroom staff Moyes had worked with at Everton. Given the success Ferguson’s coaching team had been a part of previously, it seemed a foolish step to dispense with them entirely. Moyes’ relationship with the players, too, quickly soured – the infamous story of former England captain Rio Ferdinand being told to ‘study what Phil Jagielka does’ offering a prime example of the Glaswegian’s inability to work with big talent – while his tactics were often questioned, no more so than by Dan Burn, who played in Fulham’s 2-2 draw at Old Trafford in which United set a new record for attempted crosses in a Premier League game, and the now-Wigan Athletic defender likened the champions’ tactics to those you’d find at Conference level. All in all, Moyes was just not the right man for the job. The chosen one? Yes. The correct one? Sadly not.

To rub salt into the wounds, Manchester City finished the season as champions, having played out a thrilling title race with Liverpool. The Reds had looked destined to secure their first league title for 24 years, until Steven Gerrard and Dwight Gayle combined to snatch defeat from the jaws of victory. With his contract at the club running down, the Liverpool captain had just one more chance to win that elusive league title. What could go wrong? 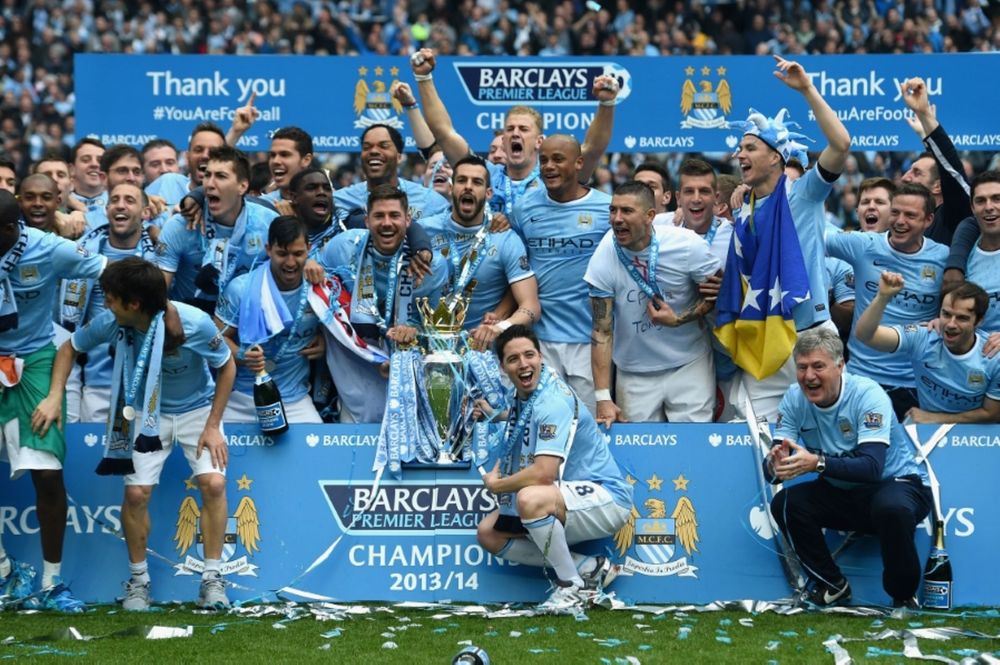