For his final assignment of the season, we’ve sent that gammon-faced old rotbag over to Russia to give us a review of the Russian Premier League season, and also offer a guide to some of the cities hosting the forthcoming World Cup. Let’s hope nothing terrible happens to him along the way…

“ Hello? Hello?! Is anybody there? Gordon Bennett. What’s going on?! UGH! Oh for god’s sake, what’s this? Where am I? Was the hood really necessary? Hang on…is this? Am I in Russia? Are you taking me to the gulags? Has Comrade Corbyn finally overthrown the government?! Oh this really will not do. This is beyond the pale. Good grief. So what am I supposed to do here then? They’ve got their own football league have they? Doesn’t sounds very communist to me. World Cup? Oh lordy. Okay, let’s get this over with so I can get back to Blighty in time for Marr. 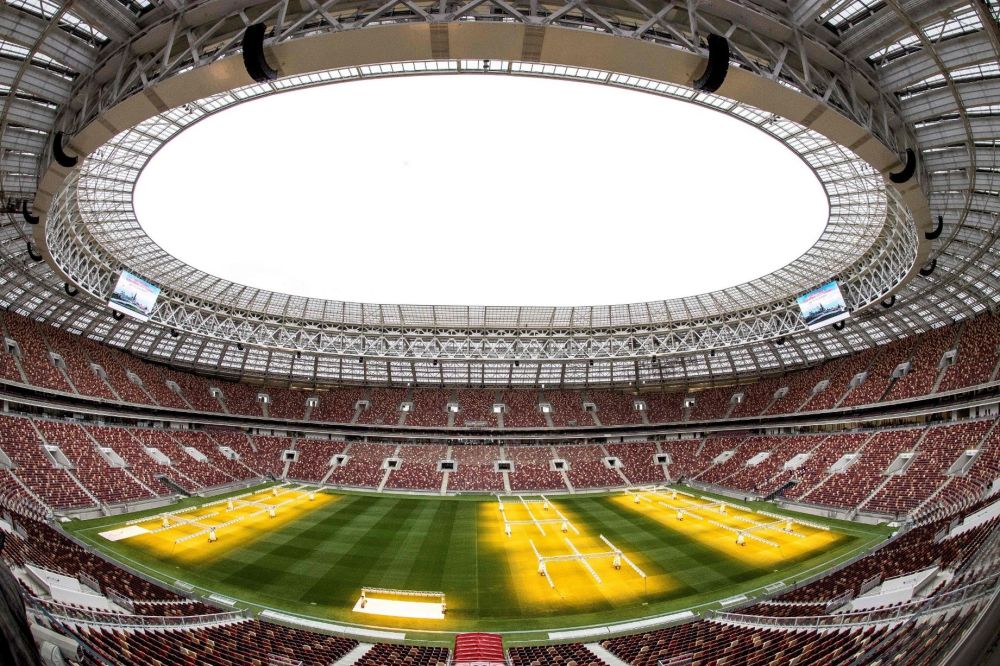 Where better to start than Moscow, where seemingly all of the good teams in Russia to come from. This season, though, it was Lokomotiv that came out on top, winning the league by two points ahead of their local rivals CSKA. Kylie will be pleased. Am I saying that right? Kigh-Leigh? Yes. Now then, Lokomotiv’s success was underpinned by the goals of veteran Peruvian Jefferson Farfan, who’s come a long way since making those noisy records in the 70s, and old Jazzy Jeff will be pleased to know he won’t have far to go come the World Cup, as his side are setting up camp in the Russian capital. Speaking of Peruvians, when are we going to repatriate Paddington Bear? I think he’s devoured quite enough marmalade sandwiches for one life-time, and he needs to stop bleeding honest hard-working British folks dry.  Goalkeeper Guilherme also played his part in Lokomotiv’s success, conceding just 21 goals in 23 appearances, as the champions finished the season with the meanest defence in Russia. And I thought that accolade belonged to Vlad! Ho ho. I wonder where the old boy is…

In second place were the sexy CSKA, who boast large swathes of the Russia national team who’ll be hoping not to humiliate themselves in front of the watching world this summer. Goalie Igor Akinfeev is, I’m told, useless, while Alan Dzageov looked to have the world at his feet in 2012, only to disappear into obscurity shortly after. I know how you feel Alan. The jewel in both CSKA and Russia’s crown, however, is the young Aleksandr Golovin. At 21 years old the boy has probably barely started shaving, I know I certainly hadn’t, but he’s attracting interest from the Arsenal thanks to seven goals and four assists this season. Just what we need, another immigrant taking advantage of the decent British public in order to further their own personal interests. CSKA pushed Lokomotiv all the way this season, but they managed to lose a whopping three local derbies, which of course put an enormous dent into their title aspirations. Better luck next time, boys!

This summer Moscow will host the opening game of the World Cup between Russia and Saudi Arabia, where there could be fireworks if the Saudi’s arsenal is anything to go by, as well as one more game from each group, including Portugal v Morocco and Germany v Mexico. Let’s hope they all lose eh? Away from the football there’s plenty of communist propaganda for you to wander around scoffing at, including John Lenin’s reanimated corpse, the Red Square (which, ironically, isn’t red at all), and the Kremlin which sort of looks like a boring circus top. All in all, I would have given it a six out of ten, but then a little old lady stabbed me in the guts, so I’m afraid it has to lose two marks. Fortunately a paramedic was on hand to ensure nothing important fell out of my tum-tum, and I made a full recovery in time to visit my next destination.

After a frankly unnecessary twenty-five hour train journey, I’ve arrived in Yekaterinburg, a place I’d never heard of. Even worse, the local side FC Ural Yekaterinburg aren’t even very good, finishing  the Russian Premier League season in 12th, two points above the relegation play-off places. Having won only eight games all season, you can understand why everyone here looks so depressed, though they did pull off a 2-1 win at home against Spartak Moscow, so its not all doom and gloom. They haven’t got any famous players in their squad, though former Tottenham leech Roman Pavlyuchenko did fire them to the Russian Cup final last season, but they have got a few amusing names among their roster. Dominik Dinga, the Serbian defender, might ring a bell, and Petrus Boumal, the Cameroonian midfielder, sounds like a Latin laboratory experiment gone wrong, but if I had to pick a favourite then Armenian striker Edgar Manucharyan would be my candidate.

But it’s not all mediocre soccer teams in the mid-east of Russia. Yekaterinburg is a marvelous hub of industry, with a rich seam of architectural delights around every corner. From the Classical Antiquity of Ural Federal University to the Modernist TV Tower, there’s plenty for the loony left culture vultures to get their tear-stained eyes around. It’s also worth taking a trip around the psychedelic salt mines if you get a chance, though don’t make the mistake I did a pop a couple of tabs of acid before you do. Three days I was down there.

Yekaterinburg will host the second match of the tournament, between Egypt and Uruguay, as well as France vs Peru and Japan vs Senegal. And I’m sure we’d all like to see the best team win there. One word of warning though, if you’re in the area and looking for a spot of tea, I’d suggest waiting till you arrive back on terra firma at Heathrow. Initially reluctant to indulge in one of the city’s famous ‘Cafes’, on account of not wanting to break the law (all proper tea is theft!), I eventually demurred only to suffer quite an upset tum. Not sure if it was due to the lacerations of the stabbing a couple of days before, I visited a local Doc and was told I’d been poisoned with cyanide. Imagine that! Say what you like about these Ruskis, but they certainly are made of stern stuff. I’ll stick to a lump of sugar next time, Boris!

Though I offered to mooch around all eleven of the host cities for the World Cup, those folk at TLF ensured me it wouldn’t be necessary, firstly because the budget for this piece didn’t stretch to eleven separate trips across Russia, and secondly because barely anybody reads the guff I write. Fair enough. I’ve had worse reviews. Either way, I was given the choice of my final destination and, after a few days of sleeping off the cyanide and the lasting effects of the stab, I made my way back west to Saint Petersburg. Now if I’m honest, I thought Zenit Saint Petersburg would have enjoyed a more successful season this time out, with that handsome Italian chap calling the shots. In the end they finished fifth, which to be honest is dog plops, especially since they were top halfway through the season. They did manage to score 46 goals, thanks mainly to the prolific Russian striker Aleksandr Kokorin, who scored 10, while defender Aleksandr Yerokhin scored 7. If he’d been defending a little better perhaps they might have won something! In fact they were knocked out of the cup by local side Dynamo Saint Petersburg, who literally no-one has ever heard of! Though that’s not the first time an unheralded group has risen up and made their voices heard, is it? I think we all know what I’m talking about. Dynamo were knocked out in the next round by the way.

Saint Petersburg’s Stadium plays host to Brazil v Costa Rica, though I’ll be amazed if either team shows up since they’re so bloody lazy, and Nigeria v Argentina, who’ll probably spend the whole ninety minutes trying to con each other out of a goal. The city will also be home to our brave boys England who, if you ask me, have a great chance of fulfilling all of their fixtures.

If you, like Gareth and the lads, fancy spending two weeks maximum in Saint Peterburg, then there’s plenty of fun for all the family. Into shipyards? Why not visit the Admiral Shipyard where you’re guaranteed to see a minimum of three boats. Into statues of an homo-equine nature? Go have a gander at the Bronze Horseman, a statue based on Peter the Great. I’ve no idea who he was but judging by his name he sounds like a top bloke. Enjoy paedophilia propaganda? Then you’ll be pleased to know that Vladimir Nabakov also spent his formative years wandering the streets of Saint Petersburg and thinking about little girls.

So there you have it. Russia in a nutshell. I’d love to say I’m looking forward to the World Cup, but unfortunately it looks like I won’t have a chance to see it as I’ve been kidnapped and am currently writing this in the basement of someone’s house. A man is holding a gun to my head and accusing me of influencing the Queen. If this has anything to do with the Leave campaign overspending then I must say it seems a touch of an overreaction. Still, I suppose we all knew it would end like this. It’s been a pleasure travelling across Europe and regaling you with these missives, but for now I’d like to leave you with one slice of wisdom. HEEEELLLLLLPPPPPP.”

So there you have it. Vile Barrage, murdered in cold, fictional blood. Oh, those Russians.
Vile Barrage won’t be back next season. Or ever again. Thank God.