Skip to content
Posted on May 20, 2018 by That's Liquid Football

So after 686 matches played from The Hollow at Potton Town to the Etihad in Manchester, and 425 goals from the first round proper in December to the semi-finals in April, the 2017/18 FA Cup came to its conclusion on a sunny Saturday at Wembley Stadium. Since the final was moved to the early evening kick-off slot in 2012, the general consensus has been that cup final day has lost a little of its magic, particularly with the abridged coverage which used to begin five hours before kick-off and include interviews with the underdog’s reserve left-backs nan, as well as discussions surrounding each team’s Cup Final song – a much-maligned relic of a simpler time, more often than not involving Chas and Dave. This year attention from the Wembley showpiece was diverted further by events twenty miles down the road, with the first union between Britain and the United States that didn’t involve thousands of innocent middle eastern civilians being brutally murdered. And wasn’t it a lovely day for it. But as tea-time approached Manchester United and Chelsea kicked off in HA9, knowing one would have to end the day the bridesmaid. Here are the talking points from the FA Cup final.

Chelsea win the battle of the Big Game Players…

Antonio Conte’s game plan was clear from the off, as Chelsea set up in a 3-5-1-1 formation, packing the midfield to frustrate United, with the back three mopping up anything that got past the deep lying pair of N’Golo Kante and Tiemoue Bakayoko. That would also mean ceding possession to Jose Mourinho’s side, but the Italian put his trust in Chelsea’s big game players to make the most of opportunities on the counter. Chelsea actually looked the more dangerous side in the opening stages, with Eden Hazard firing a warning shot at David De Gea in the ninth minute, and wing-backs Marcos Alonso and Victor Moses making a nuisance of themselves down the flanks, forcing Ander Herrera and Nemanja Matic into combative action. But twenty minutes in, and with United starting to gain territory in the Chelsea half, the killer blow was landed. Cesc Fabregas, playing the quarterback role, launched a fifty yard ball into the right hand channel and behind the United backline for Hazard to chase onto, and with the Belgian bearing down on goal Phil Jones was sufficiently spooked enough to dive into a challenge he was never going to win. Penalty to Chelsea, which Hazard comfortably buried. From then on, it was a matter of holding firm, keeping composure, and seeing out the game, and with their main attacking threats having done their job, it was time for the Blues’ defensive unit to come to the fore. Kante, as busy and bustling as ever, produced a timely reminder of why he was voted PFA Player of the Year last season, sniffing out danger at every turn and thwarting and surge forward from United. The French destroyer not only marshalled the centre of the pitch, but also provided valuable support to Alonso, doubling up on both Marcus Rashford and Alexis Sanchez to stifle their progress down the left-hand side. Kante’s four interceptions were second only to Cesar Azpilicueta, who swept up any necessary danger in the final third, making five interceptions, four clearances and blocking one shot. Any time United did manager to breach Chelsea’s defence, Man of The Match Thibault Courtois was on hand to prevent the Reds from muddying his clean sheet. The Belgian stopper hasn’t been in vintage form this season, but his five saves – particularly one at full stretch from a Phil Jones header – were enough to win the game for Conte’s side. For a game in which United (statistically) dominated, it was the spine of Chelsea’s side that impressed the most. A stark comparison to Mourinho’s team, none of whom left the Wembley pitch covered in glory. With Romelu Lukaku not fit enough to start, it would fall to Paul Pogba and Alexis Sanchez, United’s own pair of Big Game Players, to affect the outcome of the match, but neither were given the time or space to make an impact. With six shots on goal between them, neither were able to test Courtois, and despite Sanchez’s knack of scoring at Wembley, the closest the Chilean came to bothering the scoresheet was his disallowed goal following up from Jones’ header – a rare outing for VAR in the final, though replays showed the former Arsenal man was clearly a yard or two ahead of play. Perhaps the biggest compliment to Chelsea was that Herrera and Chris Smalling were United’s best players on the day – both entirely competent in their roles but completely irrelevant as far as the result was concerned.

Ironically Smalling saved perhaps his most solid performance of the season for the game that followed his omission from Gareth Southgate’s World Cup squad, as none of his three teammates that will travel to Russia covered themselves in glory. Firstly, Phil Jones. No so much a bull in a china shop as a jumbo jet invited round for tea at the Mings. Already caught out of position by Fabregas’ long ball, having lost the run of Hazard, the Preston Pratfaller, clearly unable to catch the Chelsea forward, launched into an ill-timed, ill-thought out and poorly executed challenge that ultimately lost United the game. Jones undoubtedly possesses the skill and defensive nous to become one of the best in the country, but not for the first time his questionable decision making has left him looking woefully inept. Besides Chelsea fans, his latest indiscretion will have provided particularly gleeful viewing for Harry Maguire, who is now surely Southgate’s preferred third centre-back. Across the backline Ashley Young enjoyed a slightly more prosperous afternoon, keeping Victor Moses in check for the most part and providing United’s main attacking outlet down the left. Given that Young is a converted winger, his prowess in the opposition half has never really been under question, but a heart-in-mouth moment in the 71st minute will have raised doubts about Young’s defensive reliability. After De Gea had parried Alonso’s effort, Young stood up to Moses to deny Chelsea’s wing-back a sight of goal, but appeared to shift his arm towards the ball slightly as the Nigerian attempted to go round him. VAR supported the United man’s innocence, but on another day and with another referee it could have spelled the end of the game as a contest. Rewind to United’s win at City in April, and Young was fortunate to escape two penalty decisions for handball in the opening half an hour. Southgate will undoubtedly have taken note. Manchester United’s third England squad member perhaps emerges from the game with the least damage to his reputation. Marcus Rashford was thrown into the first XI thanks to Lukaku’s lack of fitness, with his manager’s harsh words from a few weeks ago still fresh in his mind. After the 2-0 defeat at Brighton, Mourinho had fired back at those criticising a lack of rotation between United’s strikers “For 10 months I get asked ‘why always Lukaku? Why always Lukaku? Why always this player? That guy doesn’t have a chance to start, the other one is on the bench’. You know why now.” An ineffective display from Rashford at Wembley barely helped dispel his manager’s doubts, but the 20 year old was hardly assisted by Mourinho’s tactics. Left to toil between the right wing and a central position, Rashford did at least manage to test Courtois twice over the course of his 73 minutes on the pitch – more than any of his teammates – but without a game plan that played to his strengths, and finding Azpilicueta in inspired form on the day, it was always going to be a tricky day at the office for the youngster. Southgate will surely still see him as one of his major game-changing options from the bench come the World Cup.

Antonio Conte given the perfect sign off from Stamford Bridge… 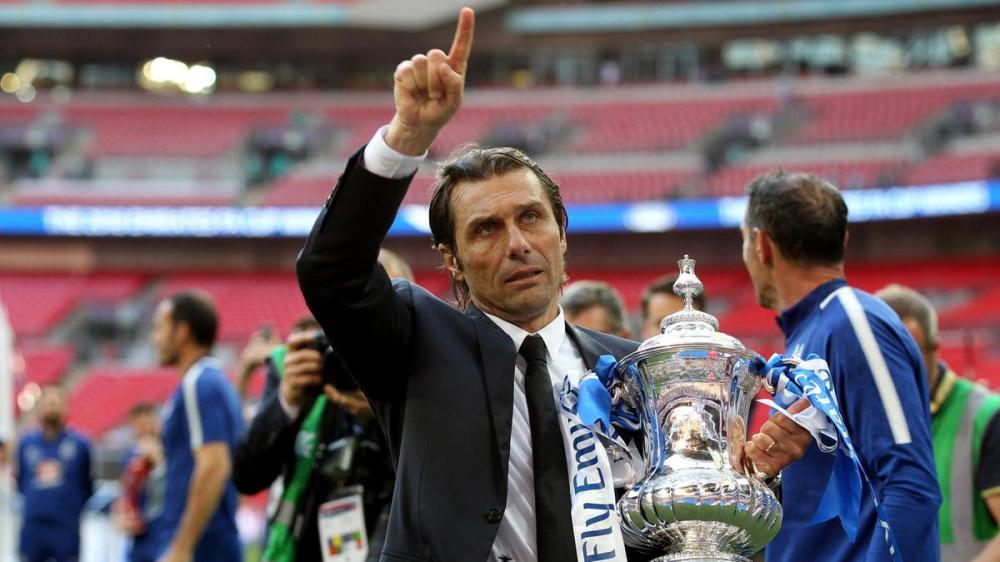 If received wisdom is proven correct at Antonio Conte’s last act as Chelsea manager was lifting the FA Cup, then the Italian can depart West London with his head held high. Having arrived at the club off the back of an admittedly freakish tenth placed finish, a machine-like march to the Premier League title followed by an FA Cup win is a decent return indeed. While neither feat will perhaps be held in the same regard as those of his opposite number at Wembley, after all you never forget your first time, nor the double-winning season of countryman Carlo Ancellotti, Conte can at least point to the differing circumstances with which his achievements were secured. With Roman Abramovich battening down the hatches on the annual warchest, and the levels of autonomy afforded Jose back in 2004, Conte has had to work with his hands tied for much of this season – a not insignificant part of why he’ll no longer be prowling the touchline at Stamford Bridge come August. Though stories began to emerge almost immediately after the final whistle that the Italian plans to honour his contract, he will in all likelihood depart should an attractive offer be sent his way. If he were to leave the club of his own volition, he’d become the first Chelsea manager to avoid his marching orders since Glenn Hoddle left to manage England in 1996. Perhaps that says more about the culture of change at the club than anything else. Still, with an overall win percentage of 65%, only Mourinho’s first spell in charge trumps Conte’s time at the Bridge. Suggestions that his tenure has been anything but an overwhelming success are nonsense.

…while Mourinho is unable to paper over the cracks.

That blissful three year spell in the noughties seems a long time ago now for the Portuguese manager, after another season in which firefighting growing pressure has trumped any talk of progress. On paper, Manchester United are in a better position than they were before Mourinho arrived at Old Trafford. A second-placed finish in the Premier League is the highest of the post-Ferguson era, and two trophies last season are not to be sniffed at. In reality, Mourinho’s Manchester United still feel like a work in progress and, given the Mourinho Three Year Cycle of Build, Boom and Bust, things are behind schedule. There are clearly a number of players either in or on the fringes of the first team that the manager doesn’t fancy. Luke Shaw will surely see the end to his Manchester nightmare this summer, having spent two seasons on the end of snide remarks from his boss, all the while seeing that mountain of potential he arrived at United with slowly disappear. Anthony Martial’s career has stagnated, and with the talent at his disposal he should be playing regularly at a European title-chasing team. Paul Pogba has been in and out of the team; often painted at United’s talisman, on more than one occasion this season he’s found himself behind youth product Scott McTominay in the pecking order. It feels more and more like this summer will prove the most pivotal spell in Mourinho’s United career – every side at the top end of the table will strengthen, it’s just a matter of who gets it right. If neighbours Manchester City are allowed to run away with the title again next season, Mourinho’s credibility as a world class modern day coach might be found in the distance with them.