Skip to content
Posted on August 30, 2019 by That's Liquid Football

According to the misattributed Winston Churchill quote, “History is written by the victors”, but coming from a man who claimed he was “strongly in favour of using poisonous gas against uncivilised tribes”, it‚Äôs fair to say old Winnie wasn‚Äôt always on the money. Flying in the face of convention, Losing My Favourite Game returns to provide the opportunity for a supporter of the vanquished to give a personal version of events from their own footballing nightmare.

This week‚Äôs guest in the seat of defeat is Paddy from 90sFootball. Software developer by day, nostalgia content machine by night, and Norwich City supporter round the clock, Norfolk-born Paddy has been following the Canaries since he was old enough to understand why all those people were going bezerk when that sphere went into the big rectangle. As a Norwich City fan, its unsurprising that Paddy has carved an impressive social media following out of content from the early days of the Premier League, given the relative success at Carrow Road throughout the period, as Mike Walker‚Äôs side took on (and beat) some of the best sides in England and Europe. Straying from his usual niche however, Paddy has dipped his toe into the new millennium, when Ronan Keating was number one in the charts, About A Boy was screening at your local Showcase Cinema, and the BBC launched its new channel for arty-farty cerebral types, BBC Four. More pertinently, Norwich City were on the brink of a return to the top flight after seven years away.

The Mike Walker debacle had left the Canaries in a tailspin at the end of the 1993/94 season, and a woeful run of one win in twenty games at the end of the following campaign had seen them fall through the Premier League trapdoor alongside Crystal Palace, Leicester City and rivals Ipswich Town. With most of the talented squad that had led them to the UEFA Cup now plying their trade elsewhere, Norwich struggled to mount anything approaching a serious challenge for promotion over the following six seasons. The emergence of young talents like Darren Eadie, Danny Mills and Craig Bellamy were enough to see the club remain on a stable financial footing, but beyond the goals of Iwan Roberts there was little to shout about following consecutive lower mid-table finishes in the First Division.

Following the resignation of Bryan Hamilton in December 2000, former Sheffield Wednesday and Leeds United defender Nigel Worthington took the reigns at Carrow Road, steering the side away from the relegation zone by the end of the season. A 4-0 defeat at Millwall on the opening day of the 2001/02 campaign suggested that the Norfolk side might be spending another year scrapping towards the wrong end of the table, but six wins in their next seven games saw Norwich sitting pretty in the playoff spots by the end of September. Having assembled a team combining the experience of Roberts, Malky Mackay, Craig Fleming and Daryl Sutch, along with the exuberance of youngsters Robert Green, Adam Drury, Phil Mulryne and Darel Russell, Worthington encouraged a gung-ho style of football, with the Canaries going into each game as likely to win 2-1 as they were to lose 5-0.

After a tricky spell in the new year, in which they picked up just ten points from a possible thirty-six, another stellar run of five wins in seven at the end of the season saw Norwich nip into the playoffs ahead of Burnley by virtue of having a +1 better goal difference. A narrow victory over third-placed Wolves in the semi-finals set up a meeting with Birmingham City at the Millennium Stadium, a game eagerly anticipated by the pre-90sFootball Paddy… 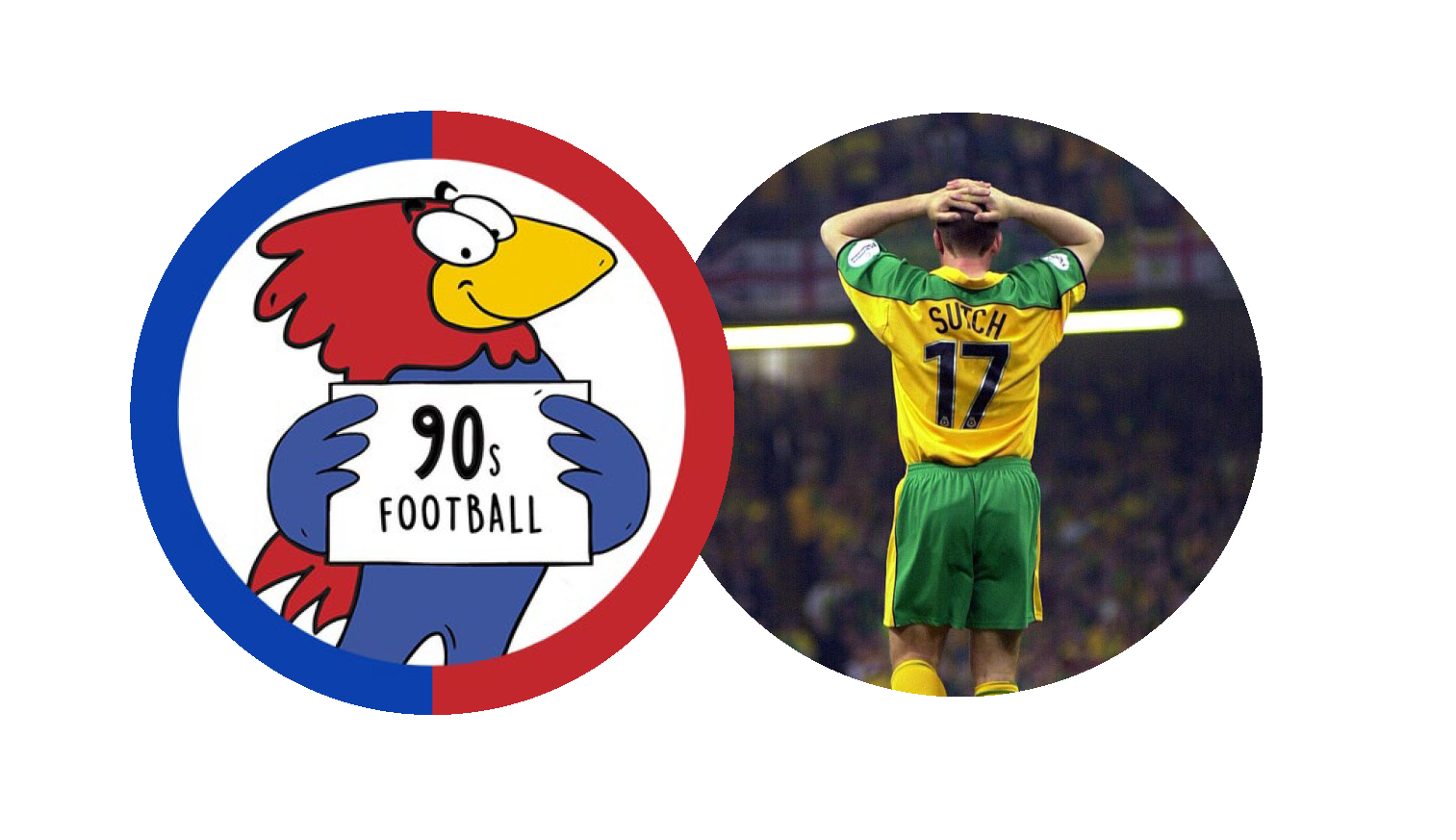 I was too young to truly appreciate our previous spell in the Premier League, so from a personal point of view the playoff final presented the possibility of properly watching my club appear in the top division. I moved away from Norwich at a young age and there weren‚Äôt many First Division games on TV back then, so it would have give me a better chance to watch Norwich on a more regular basis - plus a chance to finally collect stickers for Merlin‚Äôs Premier League sticker album with some Norwich players in!

I watched the game on TV in the lounge with my Dad. My Dad‚Äôs a Grimsby fan, but had spent some time in Norwich so took an interest in it too. I would have loved to have been there, but sadly we weren‚Äôt close to Cardiff or Carrow Road so I had to get my fix from the rare occasion we were on TV or from browsing teletext.

I think with any final you‚Äôre optimistic about the 90 minutes ahead of you, especially when both clubs have had similar seasons. We‚Äôd had a very strong end to the season, winning five out of the last seven and had beaten a very strong Wolves side in the Semi-Finals, so I was certainly feeling good about our chances. Plus, with my Dad supporting Grimsby I went to the Auto Windscreens Shield Final and Second Division Playoff Final in 1998 which both resulted in wins for the Mariners, and these things come in threes… right?

The game itself was certainly a frustrating affair for both fans, with both teams missing a host of chances to seal the game before extra time. It certainly shouldn‚Äôt have come to this, but here we both were, only 30 minutes away from the Premier League. Iwan Roberts, who had only came off the bench late into the second half, popped up almost immediately in the first half of extra time to score a brilliant header giving Norwich the advantage. We held on for about ten minutes, but Geoff Horsfield equalised towards the end of the first half. That left fifteen minutes for either side to find a winner and avoid a dreaded penalty shootout. The goal never came and to penalties it was.

Norwich didn‚Äôt have a great penalty record at that point, and that record continued. Phil Mulryne and Daryl Sutch missed consecutive penalties, so it was Birmingham City that secured promotion. That was it. The dream was over.

In the immediate aftermath I was very simply gutted, I mean, who wouldn‚Äôt be? The Premier League dream was over for another year, and as there were so many strong teams in the First Division, you‚Äôre never quite sure when you‚Äôre going to get another chance.

Having grown up watching England in the 90s, for Norwich to lose in the manner they did made me dread penalty shootouts even more. But it actually spurred me on to get to more games at Carrow Road rather than watching them on the TV. I soon realised that there‚Äôs nothing better than watching your team in the flesh, the jubilation when you get that last minute winner. And for that, I‚Äôm very grateful.

Following the playoff final defeat, we actually kept pretty much all of the squad together and had a good manager in Nigel Worthington, so I was certainly optimistic that next season would be as good or even better. Ultimately we just fell short of the play-offs in the 2002/03 season, but after signing a certain Darren Huckerby we excelled in 2003/04 and won the league in style. I can‚Äôt tell you the excitement of being able to collect stickers of players from my club. It‚Äôs the little things in life, isn‚Äôt it?