“Nur nach Hause, nur nach Hause, Nur nach Hause gehn wir nicht!” The full force of the Hertha ultras standing on the Ostkurve of the Olympiastadion could be heard well outside the confines of the historic ground. I should know because, having arrived in plenty of time for my first taste of a live German football experience, I’d been turned away for having a shoulder bag with me – apparently you’re not allowed to take bags into football stadiums, though it hadn’t once been mentioned before we were feet away from our seats. Stood in a long queue for a small trailer filled with tiny lockers, with the sound of a 75,000 seater stadium singing their bollocks off and the knowledge that I was likely to miss a large portion of the match, I suddenly found myself having a shred of sympathy for Richard Keys, who was so cruelly ripped away from his own natural habitat. Luckily I was snapped out of this hellish reverie by an enormous German man shouting something in German that I quickly worked out meant ‘these lockers are full, there’s more over there’. I had missed the first ten minutes already, and I was now joining my fourth queue of the day.

Let’s start from the beginning. I was fortunate enough to be invited to a friend’s stag weekend to Berlin (if you’re thinking ‘LADS LADS LADS’ you’ve never had the pleasure of their company i.e they’re not a cunt), and aside from the vast swathes of history and culture available in the city, we were also pretty keen to sample some of that famous European atmosphere – you know, the kind that made Arsenal fans and the British press literally cry when FC Koln had the audacity to make some noise at the Emirates earlier this season. So we went ahead and booked tickets with consummate ease for Hertha Berlin v Freiburg – perhaps not the ideal fixture to get pulses racing, given the two sides currently find themselves marooned in mid-table in the Bundesliga, but still an opportunity to visit an historic stadium and soak up the matchday experience.  We’d also get to soak up some of that glorious holiday weather – eight degrees and drizzly. After a misguided breakfast of schnitzel and pilsner, we took the U-Bahn up to the stadium, the carriages filling up slowly with supporters of all ages clad in blue and white. Walking between the station and the stadium, pockets of Hertha and Freiburg supporters could be found standing together sharing a drink at one of the many pop-up bars set up for the game, grabbing a pre-match bratwurst or pretzel to soak up the beer, or just exchanging football songs. The atmosphere was incredibly cordial – a far cry from the crowd trouble witnessed elsewhere across Europe over the weekend. After about a miles walk the Olympiastadion comes into full view, and appears otherworldly compared to many of the flat-pack, identikit stadiums in England (I’m looking at you, Madjeski Stadium). A great stone cauldron unencumbered by the reams of advertising so often found elsewhere, and flanked by the intimidating Olympic pillars replete with bullet holes at the entrance; even upon first glance you could sense the history. 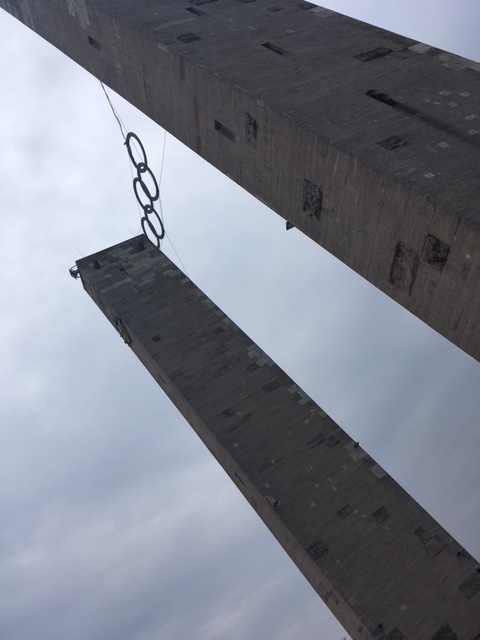 Opened in 1936 ahead of the Olympic Games, the Olympiastadion originally had a capacity of 110,000 and was the scene of African-American Jesse Owens famously mugging off Adolf Hitler and winning four gold medals during the Nazi Germany sanctioned games. Hitler had hoped that Germany’s team of Aryan athletes would provide incontrovertible proof of the master race, but ended up looking like the abominable racist he was when Owens bossed the track and field events. It was also during these Olympics that Hitler attended his one any only football match, as Norway beat Germany in the quarter finals and the mono-testicled leader left in a big old huff, but I digress. In the modern era the stadium has endured a tarnished reputation, remaining as it does a symbol of those controversial Games. In 1963 however, it took on Hertha Berlin as its tenants for the inaugural season of the Bundesliga, and the club have been there ever since, having recently committed to spending the next seven years at the stadium before building a new home. The Olympiastadion has been used in two World Cups, though despite being landed with half the fixtures from the West Germany/East Germany group in 1974, the DDR’s famous victory against their more illustrious neighbours took place at the Volksparkstadion in Hamburg. Awarded the World Cup final for 2006, the Berlin stadium has the dubious privilege of hosting Zinedine Zidane’s last action as a player – namely headbutting Marco Materazzi in the chest – as well as witnessing Barcelona’s victory over Juventus in the 2015 Champions League final. Unfortunately it hasn’t had a great deal to cheer domestically.

Despite being one of the Bundesliga’s founding clubs and the biggest club in the country’s capital, the closest Hertha have come to lifting the league trophy was their second placed finish in 1975, behind Borussia Monchengladbach. Since then they’ve been relegated to the Bundesliga 2 on four occasions, and even down to the third-tier Oberliga in the late 1980s. Their last piece of major silverware was the German Championship in 1931 – a regional league played before professionalism was introduced by the DFB. Last season’s sixth placed finish was Hertha’s best for eight seasons, but they look a long way off breaking into the top four, with Bayern Munich’s unshakable grip on the Bundesliga trophy being only nominally tested by a chasing pack that include strong Dortmund, Leipzig, Schalke and Leverkusen teams. That sixth placed finish earned them a spot in this season’s Europa League, and despite being drawn in a group with Ostersunds, Zorya Luhansk and Athletic Bilbao, Die Alte Dame finished rock bottom, added to their DFB Pokal exit at the hands of FC Koln and their inconsistent league form, it’s looking like another mediocre season for the Hertha supporters.

With the first half slowly ticking away, I finally managed to check my bag into a locker. The renewed sense of urgency by the stewards running it – perhaps not wishing to miss out on the action themselves – meant that by the time I’d made my way back to the turnstiles I’d only missed a further five or six minutes. After a heated exchange with some stewards in broken German I finally made my way up to the concourse (bizarrely populated by clusters of fans having a little mid-game natter), purchased a beer, and found the rest of the party. Upon entering the stadium – where finding your seat is remarkably easy considering the size of it – two things struck me. Firstly the level of noise coming from the Ultras (we were fortunate enough to end up in the Upper Tier of the Ostkurve, giving us an excellent view of the pitch, but also the perfect vantage point to watch the organized chaos of the regulars below), and secondly how empty the rest of the stadium looked. Save for a small pocket of a few thousand Freiburg supporters, the west end of the stadium was empty. It was later announced that the attendance for the game was 38,625 – a perfectly decent turnout, but one which left the stadium half-full. A quick perusal of the teams showed former Chelsea forward Salomon Kalou up front for the hosts alongside captain Vedad Ibisevic, Manchester City youth teamer Karim Rekik in defence, as well as a couple of promising youngsters in Arne Maier and Niklas Stark. Having been reliably informed that I’d missed a couple of decent chances, I settled into the game waiting for the inevitable goal from the hosts. A sustained period of pressure halfway through the first half eventually faded towards half-time, but the support from the Ultras did not. Aided and abetted by a drummer and a hype man, the Hertha hardcore went through their full repertoire throughout the first forty-five minutes, each one set to a familiar tune to coerce any newcomers to join in.

As half-time arrived the crowds dispersed and headed onto the concourse in search of refreshment and relief – and rather than stand in a queue at a kiosk for a £4 Mars Bar and a cup of tea, you could easily find a member of staff roaming the concourse with a barrel of beer on their back, more than happy to replenish your glass. The toilets – a million miles from the horrorshows you’ll find in the English lower leagues – were classy, clean and spacious. Of course these things rarely matter – wading through piss and pissed up supporters at Loftus Road on a roasting September evening doesn’t affect your enjoyment of the game – but it was refreshing to experience a relatively stress free day out at the football. The half-time entertainment was slightly more engaging than a supporters’ penalty shootout (being German supporters, surely it could go on indefinitely?) and certainly more entertaining than fucking Zorbing, as supporters were given the task of completing a level of Pacman in one minute, with their effort beamed up onto the big screens for the whole stadium to watch. No pressure. All good clean family fun, and the type of thing that would have Proper Football Men chewing on their Rothmans Yearbook.

As soon as the whistle sounded for the second half the drummer, hype-man and ultras started up again, and their support throughout the second half was absolutely relentless with the only gaps in songs reserved for boos and whistles directed at Freiburg whenever they had the gall to win a corner. If the first half was light on goalmouth action, the second was a barren wasteland. Freiburg, having already played out five goalless draws this season were happy to see the game out, and Hertha’s strikeforce of Kalou and Ibisevic, combined age of 65, looked more blunt by the minute. Hertha boss Pal Dardai introduced Davie Selkie and Ondrej Duda on the hour, much to the approval of the Ostkurve, but despite camping out in the visitors half for the final fifteen minutes, the home side were unable to find a route to goal. The biggest surprise of the afternoon arrived at the final whistle, as the home supporters voiced their opinion on an uninspiring goalless draw against a poor side with boos and whistles directed towards their team – the first signs of supporter dissent throughout. The atmosphere back out on the concourse and towards the U-Bahn station was jovial, however, with many supporters returning to the pop-up bars for a drink and a bite to eat before heading into a grey, drizzly Berlin evening.

If you’re considering heading over for Germany to a game then I’d heartily recommend Hertha. Their fans are a friendly bunch, their stadium is a slice of history, and you can budget for a full day out for the price of your average Premier League ticket. While the game itself may have been a letdown, the enjoyment to be had in a good old fashioned knees up with big bratwurst and a pint or two more than made up for a lack of goals. Just don’t try and take your bag in.

One thought on “A Day Out At…Hertha Berlin”